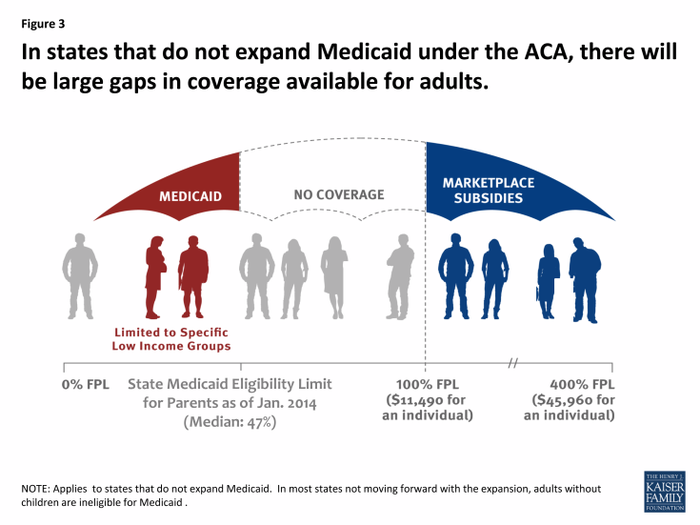 In South Carolina, Medicaid was not expanded and nearly 200,000 will fall into a gap in coverage assistance.

7:11 am on Sunday November 10, 2013 | Posted by Ken Hawkins | References Kaiser Family Foundation
194,330 in S.C. to go without in healthcare 'coverage gap'; Hospitals brace for impact

While some 336,000 South Carolinians will get subsidies for their health insurance, another 200,000 are stuck too poor for subsidies and not poor enough for free coverage.

It's part of a national "coverage gap" in states that refused to expand Medicaid.

The Kaiser Family Foundation conducted the study (read the results and the methedology here).

That coverage gap is also expected to have a blowback effect on hospitals, The New York Times explains:

Now, in a perverse twist, many of the poor people who rely on safety-net hospitals like Memorial will be doubly unlucky. A government subsidy, little known outside health policy circles but critical to the hospitals’ survival, is being sharply reduced under the new health law.

The subsidy, which for years has helped defray the cost of uncompensated and undercompensated care, was cut substantially on the assumption that the hospitals would replace much of the lost income with payments for patients newly covered by Medicaid or private insurance. But now the hospitals in states like Georgia will get neither the new Medicaid patients nor most of the old subsidies, which many say are crucial to the mission of care for the poor.

“We were so thrilled when the law passed, but it has backfired,” said Lindsay Caulfield, senior vice president for planning and marketing at Grady Health in Atlanta, the largest safety-net hospital in Georgia.

It is now facing the loss of nearly half of its roughly $100 million in annual subsidies known as disproportionate share hospital payments.