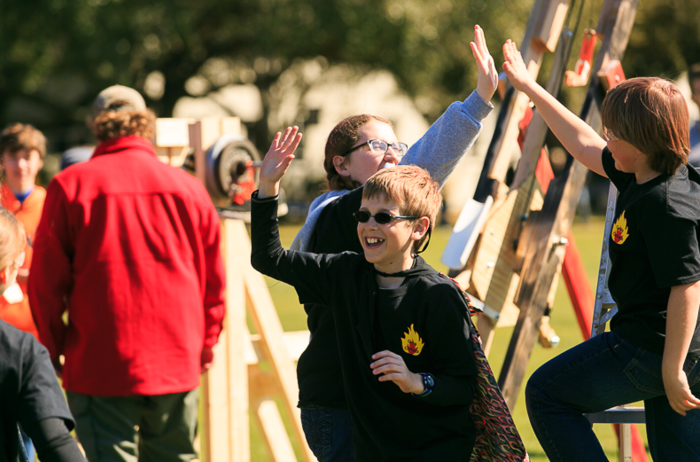 In the Centurion Division, Cairio Middle won for Overall Distance

Congratulations to the winners from the 2015 Storm the Citadel! Trebuchet Competition. The STEM Center of Excellence at The Citadel hosted the 5th annual competition and more than 80 teams, comprised of more than 1,000 participants, took part on Saturday, February 14th.

Elementary school students competed in the Hoplite Division.  For Design, the Murray LaSaine Kaleidoscope Stinger Bees were 1st (pictured). The Daniel Island School Blue-Eyed Bombers and the Porter-Gaud Einsteins tied for second, followed by the Sedgefield Pink Dolphins. For Spirit, there was a first place tie between the  Sedgefield Pink Dolphins and the Hunley Park Stinger Bees, followed by Faith Christian and Porter-Gaud Einsteins.  For Accuracy, the James Island Kaleidoscope Raiders earned the top slot, the Charles Pinckney Elementary School were 2nd with the Heathwood Hall #1 in 3rd.

In the Centurion Division for middle schoolers, Cairio Middle School won for Design, followed by DuBose Middle School and BSA Troop 502. For Accuracy, Sangaree Middle won for the second year running, Palmetto Scholars Academy were 2nd with a tie for 3rd place between the BSA Troop 502 and Cane Bay Middle School.

Storm the Citadel! is held as part of National Engineers Week, which celebrates science, technology, engineering and math. The trebuchets, a type of medieval catapult, were judged on accuracy, distance, spirit and design.  To help competitors prepare, The Citadel’s Physics Department provided free workshops for team leaders.  “We had more teams than ever before for Storm The Citadel 2015 which was really exciting to see. The continuing growth of what is now one of the largest STEM events in the south shows us kids really do want to learn about science, technology, education and math,” said Col. Ronald Welch, PhD., dean of The Citadel School of Engineering.  “To influence the number of people we do now it takes three things: engaging activities like the trebuchet competitions, mystery robotic courses, Lego gear lifts and craft stick bridge loading events at Storm The Citadel.”

Welch continued, “It also takes the leadership we see from the dedicated teachers and mentors on the field with their teams after months of lessons leading up to the competitions. The third ingredient is the uncompromising commitment by the students and faculty within the civil, electrical and mechanical engineering programs at The Citadel who coordinate and supervise the entire day. ”

"Engineering math and physics is not about sitting at a table with a piece of paper and a pencil, doing boring stuff,” said Google's Jeff Stevenson. “It’s about getting out, building stuff, having fun, learning about scientific method. These are fun exciting careers that kids can get into. This is just one way to remind them – this is fun, cool stuff you can do.”

As part of its mission of preparing students for the 21st century workforce, The STEM Center of Excellence at The Citadel hosts the annual trebuchet competition, which is co-sponsored by Google.