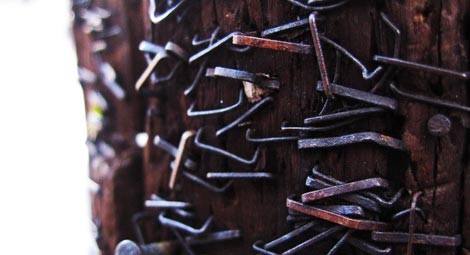 6:27 am on Friday February 20, 2009 | Posted by Ken Hawkins
Charleston cracking down on temporary signs, posters

Image by Ken Hawkins/TheDigitelImage by 20090220-sign.jpg The city's fed up. A utility pole at Calhoun and St. Philip's streets.

Thinking about tacking up that yard sale sign or concert poster to the telephone pole? I wouldn't, if I were you. The city's threatening $250 fines.

Here's what the city said in an e-mailed press release:

Due to the abundance of snipe signs within city limits, the City of Charleston has begun enforcement of this violation. Snipe signs are any form of leaflets, handbills, posters, flyers, announcements, or any other advertising and informational materials that are tacked, nailed, posted, pasted, glued or otherwise attached to trees, poles, stakes, fences, building, or other objects. These are the signs generally tacked or nailed to telephone and light poles around the city.

The City of Charleston’s Livability Court, Zoning Division and Keep Charleston Beautiful will be conducting a Snipe Sign Initiative beginning February 17, 2009. During this week-long initiative, code enforcement officers will focus their efforts on enforcing the City ordinance that prohibits illegally posted temporary signs. All sign violators will be given a summons with a possible fine of up to $250. This initiative will begin the City’s Zero Tolerance for illegally posted signs and will mark the beginning of immediate citations for offenders. Individuals who have placed signs illegally are encouraged to remove them immediately to avoid being issued a citation.

It's hard to say if this effort will be maintained or is a "reminder session." But, like I said, I'd avoid stapling this weekend.