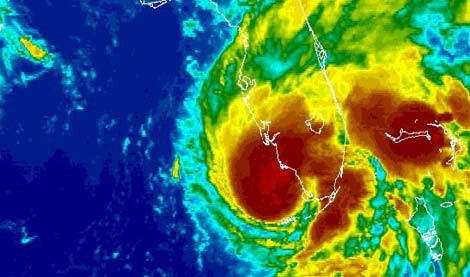 Update 11:20 p.m.: The 11 p.m. forecast expects Fay's path to be even more blunted, which will likely mean less wind and rain for South Carolina's parched counties.

Though, of interest is that it's looking more likely the storm could emerge on the other side of Florida and re-enter the Atlantic, where it would have a chance to strengthen.

Update 10:44 p.m.: NBC News 2 has a story about how Fay could bring rain our way, and to the upstate. They talk to state climatologist Hope Mizzell who points out the sore truth that even five inches of rain will still leave us sorely lacking.

The 11 p.m. forecast will be out soon. We'll update you when it comes.

Update 6:26 p.m.: The forecast has shifted somewhat at 5 p.m. It shows that forecasters believe the storm will head overland towards Savannah but then shifting inland towards Atlanta.

Original post: Tropical Storm Fay is still a bit of a long shot to make landfall on us, but models are suggesting it could crawl up our upstate backside and bring winds and tons of rain.

Though, more rain could be just what the doctor ordered. But the predicted path could change rapidly depending on how and where the storm makes landfall.

The storm is expected to reach near-hurricane strength before making landfall in Florida. Charleston has been given a 28% chance of experiencing sustained 39 mph winds at any point through Saturday. Only a 9% chance was given for winds at 57 mph.

You can watch a video forecast over at The Weather Channel.

If you'd like e-mail updates, send an e-mail to storms@thedigitel.com with the subject "subscribe" and we'll send you e-mail updates. (we promise not to spam) Also, stay tuned to the National Weather Service's Fay page.

We'll post more updates on where the storm is, where it might go, and what you should do. So, go ahead and bookmark our weather topic page.