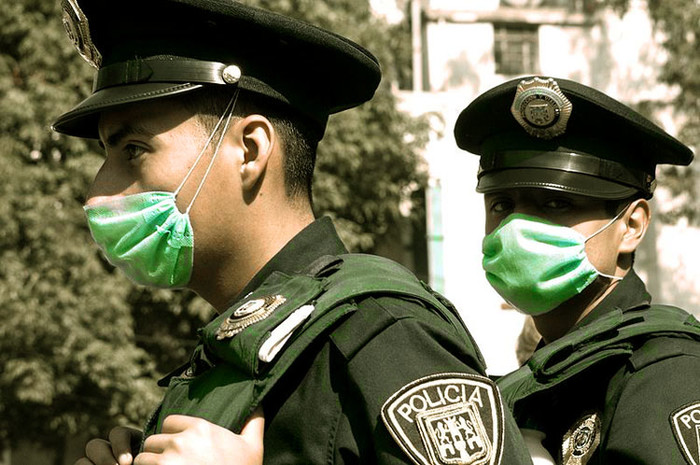 Image by Flickr user sarihuella Image by 20090427-swine.jpg Mexican police officers with masks on to protect themselves from the swine flu outbreak gripping the country.

Update April 28, 11 a.m.:  At least two of the cases have been confirmed as probable and sent off for more testing. Read more here.

Concerns are high that Swine Flu may have made it to South Carolina after a group of teens that recently returned from Mexico have all fallen ill.

Samples have been taken and officials are awaiting test results.

There was some issue with the timeline as the group's trip ended on the 20th, and the incubation period is generally 24 to 48 hours. However, at least some students began to feel ill as early as the plane ride back.

The students are all from Newberry Academy. A message posted to the site read:

Since our seniors were in Mexico a week before last, upon their return some had flu like symptoms. DEHC recommended that we close school on Monday, April 27th, as we await test results to make sure it is not the swine flu.

The State has done a good job reporting from the scene. They also note that Columbia and state officials are making early preparations should there be an outbreak.

To stay apprized on the latest, consider following @CDCEmergency on Twitter.

In the meantime, here are some helpful tips from the CDC:

We'll keep you posted on the latest.

In the meantime you can read the morning reporting from The State and The Post and Courier.

The State also reports that the area's pig farms remain healthy. -- It's important to note that you can't get the Swine Flu by eating pork, even pork from a sick pig (that's the beauty of cooking meat).

Update, 7 p.m.: The school will remain closed for a second day as they await the test results. As always, we'll keep you posted.

To stay updated In the meantime, I suggest this page on Wikipedia and this Twitter search.