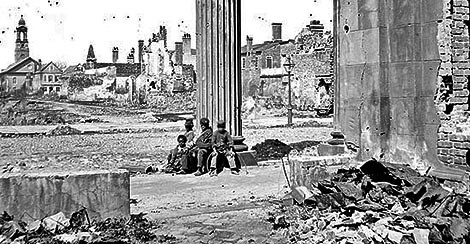 Image by 20090131-charleston-history.jpg The Civil War's effects on Charleston, obviously, makes the list.

Charleston Magazine has a piece that I knew would be great as soon as I saw the title: "Charleston 101 Defining moments that shaped our city." And it doesn't disappoint.

I'll be honest, the page is long and intimidating when you first look at it, but take a deep breath and start scrolling, you won't be disappointed.

Here are a few of my favorites:

59. Red Summer Begins, 1919
A fight between two white sailors and a black Charlestonian escalates on May 10 after the local man is killed. For more than a day, whites assault blacks throughout the city, leaving three dead and 17 seriously injured. The incident sparks nationwide race riots, leaving 43 black men lynched and eight burned at the stake, but it also witnesses the first modern-day instance in which African Americans organize to resist oppression.

60. Tobacco Workers Strike, 1945
A group of primarily black tobacco workers walks out of the segregated Cigar Factory, crippling one of the city’s most prosperous industries. The strike grinds on for five months, mostly during a brutally cold, wet winter. However, its eventual success lays the groundwork for the civil rights movement two decades later and elevates the song “We Shall Overcome” as the movement’s anthem.

94. John C. Calhoun Buried—Again, 1850
In April, the former U.S. senator, vice president, and ardent defender of Southern rights is buried in Charleston during a funeral that draws thousands of mourners, including pallbearer and future Confederate president Jefferson Davis. One historian called it “perhaps the most elaborate ceremony of its kind the city ever witnessed.” Calhoun was buried four times: once in Washington, D.C., and three times in Charleston.

As you can see, there are some real gems in there.