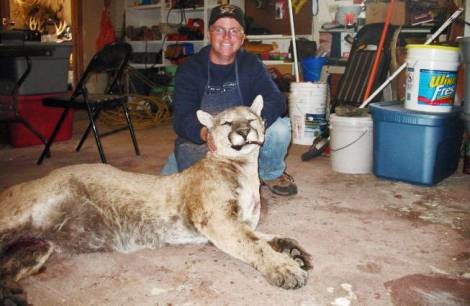 An e-mail claims a mountain lion was hit and killed by a man driving down the road near Greenwood. The S.C. Department of Natural Resources says it's a hoax:
The hoax e-mail says, among other things, that "Wally Tiernan" struck the mountain lion on Highway 178 and an officer from DNR was called to dispatch the animal. No officer or any other personnel from DNR in Region 3 (which covers Saluda) or any other region in South Carolina has received a call or dealt with any mountain lion.

THe e-mail began sometime around February of this year. Snopes.com offers a copy of the South Carolina e-mail:
Look at what Wally Tiernan hit with his car on Highway 178 approximately 16 Miles East of Greenwood, South Carolina in Saluda County. The Lion Was Barely alive and unable to move, so our neighbor called SCDNR and They Came And put the lion down. A land owner believes this is the same lion He had seen a week earlier dragging a 320 lb steer out of the pasture. This lion weighed 260 lbs. While most mature male mountain lions weigh 80 to 150 lbs. We have seen evidence of Their Presence through tracks In the dirt but had no idea this big guy roamed around here!

The lesson? Always question what you read online. And, that's why we offer links to our sources.