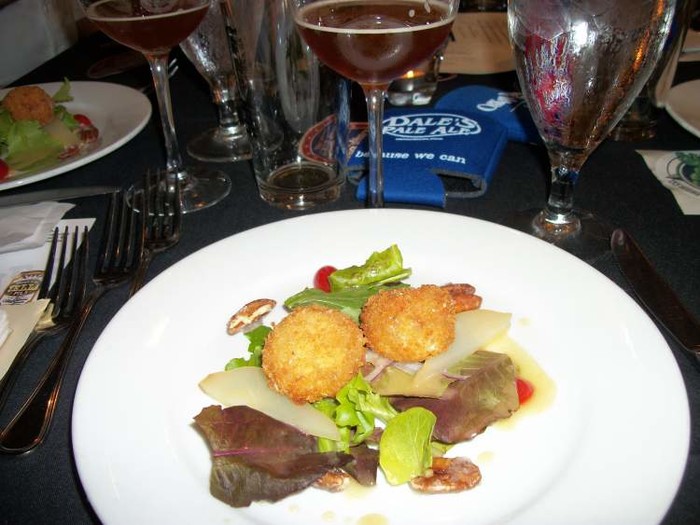 After a reception featuring your choice of lighter fare from both breweries - Terrapin Rye Pale Ale (5.5% ABV, B+, 92) and Oskar Blues Mama's Little Yella Pils (5.3% ABV, B, 63) - we were seated and greeted by LA's co-owner Karen Elsey before the brewery reps took over.  Both Dustin from Terrapin and Adam from Oskar Blues did a great job keeping the evening fun and light-hearted, from periodic audience toasts to having the whole room do the wave at the end of the night.  But I digress, on to the belly-filling portion of the evening.

Terrapin led off with pairings for the first two courses, the first one being a shrimp & scallop ceviche served in a small glass with two crispy tortillas, paired with Monk's Revenge Belgian Double IPA (9.8% ABV, B+, 92).  The seafood in this was plump, fresh, and substantial, with each piece taking up the width of the glass.  The pairing was an interesting one, with the esters from the beer (which we learned came from a Chimay yeast strain) playing against the slight salt in the seafood, and of course the citrus.

Next up was my favorite course of the night, the poached pear salad with mesculin.  Sounds pedestrian, but not when you add bleu cheese fritters, candied pecans, and cherry tomatoes.  The creamy fritters playing against the sweet pecans and slightly tart vinaigrette was a real highlight.  Holding up the malty backbone was Terrapin's Double Feature (7.7% ABV, B+, 67), a great dubbel and part of their series of beers celebrating the recently burned Georgia Theater.  The big-bodied beer provided a great basis to come back to after the varied notes of the salad.

The beer switched gears at this point, moving from Terrapin to Oskar Blues, and moving significantly up in ABV.  The next course was my first foray into bangers & mash, with beer-braised bangers and braised cabbage.  The fried bangers were great, but damn near necessary due to the bonkers beer pairing - Oskar Blues Old Double Bagger (ODB) Barleywine (13.2% ABV, B+, 93).  You read that right, 13.2% ABV.  Even with a year of aging on it, this beer's alcohol content was all up in your grill.  But again, the pairing worked thanks to the starch of the mash and the all important (but even-handed) grease factor from the bangers.

The dinner ended with a delicious dessert and my absolute favorite beer of the evening - nay, the last few months.  A house-made chocolate-macadamia cheesecake was paired with Oskar Blues Barrel-Aged Ten Fidy Imperial Stout (9.4% ABV, A, 100).  The cheesecake was stellar, with rich chocolate and a macadamia crunch that quickly invoked my wife's now-famous "dessert face."  But seriously, this beer was completely amazing.  The whiskey notes melded perfectly with the roasted chocolate and coffee flavors of the base stout.  In this writer's opinion, there are few things better in life than a well-balanced barrel-aged beer.  Oskar Blues knocked this one out of the park.

As per normal, Chef Matt Brigham and his crew came out to talk about the meal.  It was at this point that we learned the entire meal was paired blind -- that is to say, the beer didn't arrive until the day-of.  Quite a feat, if you ask me.  And just when I thought I was satisfied, I was serenaded with a month-early birthday rap by one of Chef Matt's team members.  'Nuff said.

Laura Albert's is located at 891 Island Park Drive on Daniel Island, and tweets from @LauraAlberts. See the whole picture set at my Flickr page.