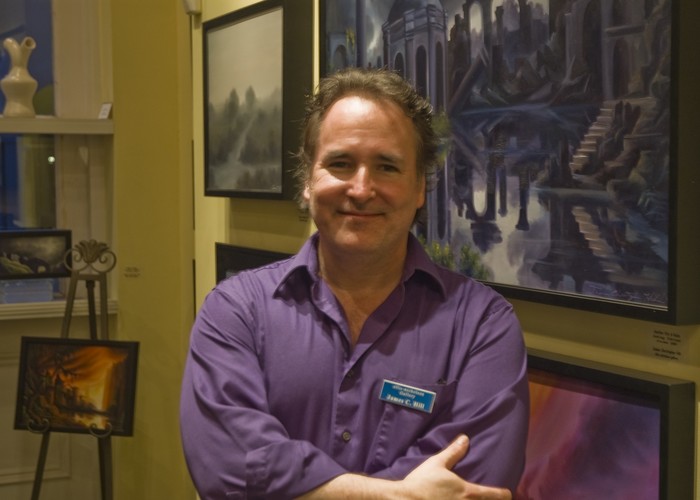 The City of North Charleston’s Cultural Arts Department is pleased to host a one-night-only exhibition and artist reception in recognition of graphic and fine artist James Christopher Hill on Thursday, October 9, 2014, from 5:00-7:00pm. The free, public event will take place on the third floor of North Charleston City Hall, located at 2500 City Hall Lane in North Charleston.

In 2013, James Christopher Hill was awarded a commission by the City of North Charleston to design a large outdoor public mural highlighting the City’s history, from colonial times to the present. Plans to install Hill’s 140-foot by 40-foot mural design on an elevated tank near the City’s Olde Village were halted, but officials moved forward with commissioning the artwork. A large canvas giclée print of Hill’s creation currently hangs in the Executive Department offices at City Hall. The design, which includes renderings of maps, prominent historical figures, significant landmarks, and symbols of industry that are pertinent to the history and development of North Charleston, will be displayed as a public mural once an appropriate location is determined. For now, the public may view the design, along with some of Hill’s preliminary sketches and research, at the October 9 exhibit. The artist will also display a number of his fine art oil paintings.

James Christopher Hill is no stranger to producing public art pieces. His hand painted murals can be seen locally on the Planet Follywood restaurant on Folly Beach, at Cypress Gardens, and in the Mellow Mushroom restaurant located in downtown Charleston. He is perhaps better known for his oil painted landscapes and skyscapes executed in traditional American realism and contemporary romanticism style, as well as illustrative works in the Science Fiction, Fantasy and Gothic/Horror genres. His talent with a paintbrush translates seamlessly into his skills as a graphic artist, as demonstrated by his City History mural design, which he digitally painted using computer software.

James received formal training at the prestigious Ringling College of Art and Design in Sarasota, Florida, where he graduated with honors with a Bachelor of Arts in Computer Animation in 1998.  His senior animation thesis brought Ringling College their first OSCAR for Best Student Computer Animation from the Motion Picture Academy of Arts and Science.  Over the last 16 years, his award-winning original works have been collected extensively by private and commercial clients both locally and in various countries throughout the world, including Japan, Russia, China, Germany, France, Spain, India and many more. For more information about James Christopher Hill, visit jameshillgallery.com.

For information on additional exhibits, programs, and events offered by the City of North Charleston Cultural Arts Department, call 843-740-5854, email culturalarts@northcharleston.org, or visit the Arts & Culture section of the City’s website, northcharleston.org.