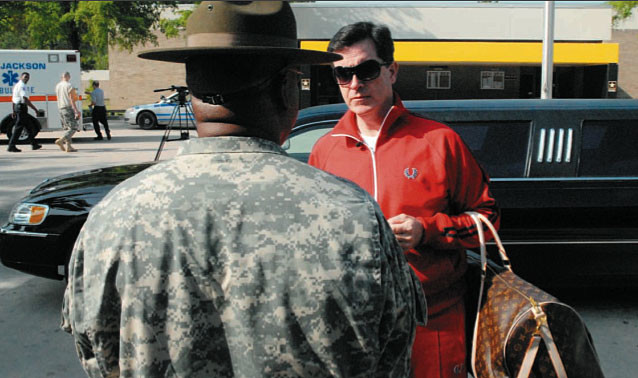 6:37 am on Tuesday May 19, 2009 | Posted by Ken Hawkins
Pvt. Stephen Colbert reports for basic training in Columbia

Fort Jackson's paper, The Fort Jackson Leader, has a great story that slipped past most everyone: Steven Colbert's turnout for Basic Combat Training prior to a trip to the Persian Gulf.

While there Colbert was filmed and played his on-screen non-team-player personality.

While the vast majority of new Soldiers arrive to Basic Combat Training in a bus from the airport, the Army’s newest private arrived in a style befitting his cult-like status.

Pvt. Stephen Colbert, of The Colbert Report, showed up in front of the 120th Adjutant General Battalion (Reception) Friday in a stretch limousine ready to begin his in-processing.

Colbert got off on the wrong foot when he dropped his bag in front of his drill sergeant and promptly asked, “Can I get a bellman?”

You can keep reading the Web version, but I highly suggest the PDF version if you don't mind the wait (page 20).

Colbert was there May 8th. -- An air date for the episode has not yet been scheduled.

Thanks to The State for digging this one up.