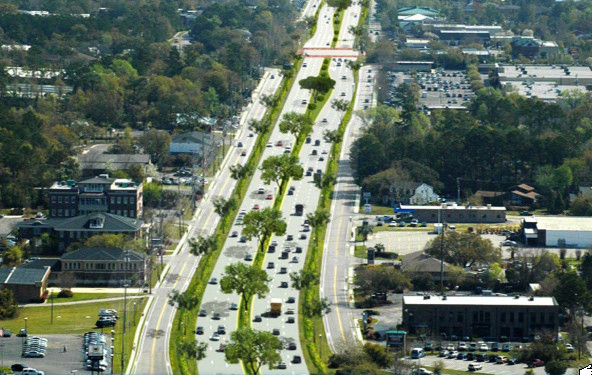 5:04 pm on Tuesday December 11, 2012 | Posted by Ken Hawkins
Get ready to slow down, Johnnie Dodds widening in Mt. Pleasant is imminent (Update: All but done)

A rendering of the soon-to-be new look.

The widening of Johnnie Dodds Boulevard is set to break ground on December 9, with road work being visible as early as January 2011, and expected completion by November 2012.

The most notable changes of the 3-mile $84 million Charleston County Transportation Sales Tax project will be landscaping, more lanes, redesigned frontage roads with bike lanes and sidewalks, and a new overpass at Bowman Road.

You can read all about the project on the Charleston County RoadWise project page, and in this announcement from the Town of Mount Pleasant.

Update November 2: And the first bit of closures is starting, on Thursday, December 2, there will northbound lane closures near the Ravenel Bridge on the Mount Pleasant side. The work is to be done between 9 p.m. and 6 a.m. Friday morning. If the weather is bad work will be done the following day. -- Do note the entire road won't be closed. More details here.

Update November 3: As though you hadn't noticed, the work is all but done on the two-year, $84 million project.

ABC News 4 notes the impending completion in a report.