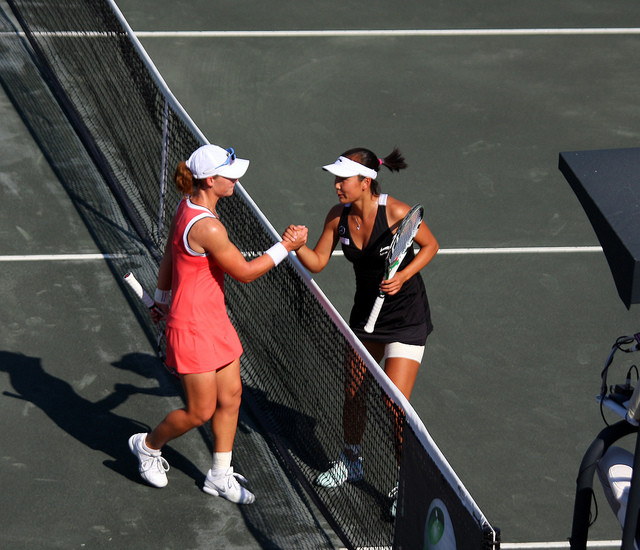 Update February 20: USTA has said there won't be another election in 2011 and they're not yet sure about 2012.

And that means we've got at least another year to bask in our glory.

The Post and Courier has some chatter about the news; read it here.

First reporting, September 6, 2010: Charleston has been voted the winner of the USTA's "Best Tennis Town" title and will receive $100,000 from the USTA to be used for community-wide tennis programming or facility enhancements.

The announcement was made Monday afternoon during a special ceremony in Arthur Ashe Stadium during the 2010 US Open at the USTA Billie Jean King National Tennis Center in Flushing, N.Y. As the 2010 "Best Tennis Town," Charleston-which garnered the most votes during the nationwide, online balloting period from July 16 to July 26.

Representatives from the top three vote-getting communities in contention for "Best Tennis Town"-Charleston, Atlanta, Ga., and Richmond, Va.-were all in attendance. The city of Atlanta, the first runner-up to Charleston, will take home $50,000 from the USTA for their local tennis programs, and second runner-up Richmond will receive $25,000.

"The USTA is excited to see the passion and commitment to tennis that these towns have showcased through the 'Best Tennis Town' contest," said Kurt Kamperman, Chief Executive, Community Tennis, USTA. "We were overwhelmed by the enthusiasm of all of the entrants in the contest and are pleased to see Charleston, a community that exudes such a high regard for tennis, take home the title and the grant to continue its dedication to tennis in the community."

Named as one of the nation's top-10 best cities for strong infrastructure, attractive economy and savvy urban planning last year by Forbes Magazine, the city has more than 13,000 local tennis players who take to the courts every year, including more than 7,500 who play USTA League tennis. In addition, the city houses more than 580 tennis courts within its 485 square mile radius, and is home to the annual Family Circle Cup women's pro event.

"Being voted the Best Tennis Town is not only a tremendous honor; it confirms the passion and dedication Charlestonians feel about the game," said Ken Edwards, President of the Lowcountry Tennis Association, who received the trophy and a $100,000 check on behalf of Charleston. "Our experience has taught us that the best way to inspire a love of tennis is to foster enthusiasm at an early age, so the award money granted to us by the USTA will be used to further the advancement of youth tennis through the QuickStart initiative.  We are very thankful to our tennis community, our business partners, the people of the Lowcountry, and everyone who gave their support in getting the votes that made this all possible."

Charleston beat out a total of 81 cities in the USTA's nationwide search to identify the 2010 "Best Tennis Town." The national competition began in April, when tennis communities from across the country submitted their entries for consideration on www.besttennistown.com.  After carefully reviewing each submission, a panel of judges selected 10 communities as finalists.  The USTA profiled the Top 10 contenders on the website and hosted a nationwide vote to determine the "Best Tennis Town."