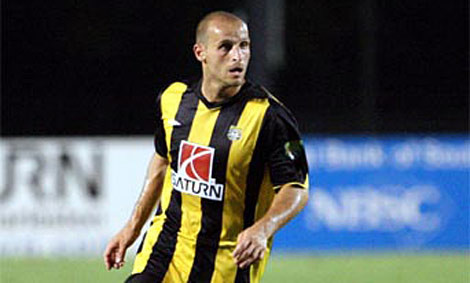 Image by Charleston BatteryImage by 20080709soccer.jpg
Lazo Alavanja scored against his former Club as Charleston knocked off Major League Dallas.

After being knocked out to the US Open Cup the last two years by FC Dallas, the Charleston Battery won against the Texans to advance to the semifinals before a crowd of 5,911.

Charleston a First Division team won 3-1 against the major league team on Tuesday in Frisco, Texas.

It's been a good year for the team, The Post and Courier offers this :
This may be bragging material for the USL, but for Charleston coach Michael Anhaeuser, beating an MLS team on the road is simply a continuation of a very good team having a very good year.

"For us, we feel very confident,'' Anhaeuser said. "We're scoring goals and we're defending well. When that happens, you have a chance against anyone and we proved that tonight."

The Seattle Sounders also won, but with penalty kicks in a scoreless Tuesday night game against the Kansas City Wizards.

So, Charleston will take on Seattle in the semifinals. It seems to be an encouraging setup, as Charleston beat Seattle on Saturday.

Wether Seattle or Charleston wins, this will be the first time since 1999 a non-major league team will be in the Open Cup Final. The tournament's bracket is available. It's an encouraging scenario for our 1993 team that has never made it to the Open Cup Finals before.

Watch the semifinals at Blackbaud stadium on August 12 at 7:30 p.m.