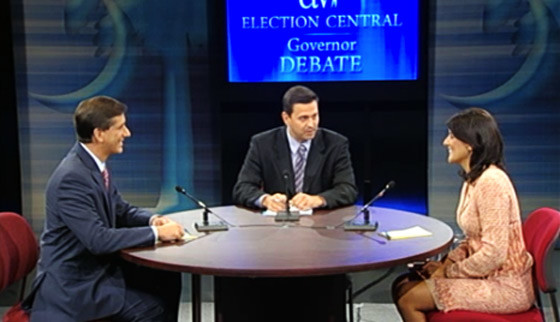 3:23 am on Wednesday October 27, 2010 | Posted by Ken Hawkins
A rundown on the Haley-Sheheen debate (update: round three)

The candidates were back it on Tuesday night in Florence. Frankly, it was much the same and the biggest news out of these series of debates is that both candidates avoided saying or doing anything so bad that would make it to YouTube or The Daily Show.

Runner up to that would be the Haley-Sheheen sparing on the proposed construction of Interstate 73 in South Carolina, which Haley said she wouldn't use tolls, allow a proposed gas tax hike, or earmarks to fund. To which Sheheen responded, "Things don’t just happen."

In all my favorite report from the night is likely The State's report with the Associated Press's as a close second.

Running along side of those is a lighthearted Post and Courier column that "translates the candidates into plain English," and a piece that dives into how often Haley was tied to Sanford and Sheheen to Obama.

If you missed the debate, tune in at C-Span online.

On Monday night South Carolina governor hopefuls Democrat Vincent Sheheen and Republican Nikki Haley sparred for the second of three times. This time the focus was more or less on the role of government.

The State has a nice write-up of the whole debate with a sidebar on when the candidates seemed to best reach home with conservative voters; take a read here. While The Post and Courier has a nice fact-checking piece.

If you missed the debate you can watch it online at S.C. ETV.

Don't forget the last debate is tonight, October 26, at 7 p.m. at Francis Marion University in Florence, you can watch it at scnow.com and C-SPAN.

If you missed the first debate get all you need to know here (like how to watch it and what happened.)