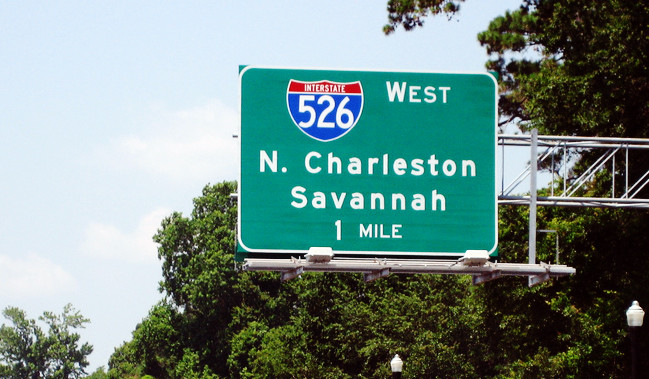 Two main threads of new interest are how the 526 extension is taking a backseat to other pressing needs in the Charleston area (and state,) and how Limehouse's tenure is all but over.

Read the paper's report here — and also check out this graphic that shows the county's proposal vs. SCDOT's.

First reporting: Remember how Charleston County voted down the I-526 "parkway" plan from James Island to West Ashley and instead proposed a shorter extension of the Mark Clark Expressway? Now remember how S.C. Transportation Secretary Buck Limehouse said no way?

Well, Charleston County leaders say they aren't going to take it and Charleston County Administrator Allen O'Neal has written a strong letter to the SC DOT saying, in part, "It isunacceptable that the Department simply refuses to look more closely at those alternatives, Charleston County is the sponsor and 'owner' of this project ... the County has contracted with SCDOT to administer the project on the County's behalf; therefore, we expect the SCOOT to comply with its contractual obligations to the County and take additional steps to review these alternatives."

In short, O'Neal is demanding a detailed assessment on the county's ideas as to why they will or won't meet the goal to "enhance mobility to and from James Island."

The Post and Courier was the first to publish this letter and has a short post up now and is promising more reporting in the morning.

We'll be sure to update you when that post is out and the full text of the letter is below.

The Honorable, H, B, Limehouse, Jr,
Secretary of Transportation

I am writing in response to your letter dated November 18, 2010, which was received November 30 regarding the Mark Clark Expressway project. Thank you for meeting with us to discuss these issues, and for the conversations we have had with you and your staff since December, Charleston County requests that the SCOOT consider the opinions/concerns outlined below:

A large number of public comments received during the open public comment period expressed concerns about the recommended preferred alternative for Council's consideration, Several Charleston County Council members were copied on the comments presented to the SCOOT, The "New Way to Work" (Alternative 19) and "Improvement of Existing Roads" comments were a majority of the comments that members received, County Council requested that these alternatives be evaluated again, considering the public's input and your agency's responsibility under the National Environmental Policy Act (NEPA), County Council requests that your agency respond to the comments by supplementing, improving, or modifying your analyses, It is unacceptable that the Department simply refuses to look more closely at those alternatives, Charleston County is the sponsor and "owner" of this project and a Joint Lead Agency for the Federal Environmental Review process, The County has contracted with SCOOT to administer the project on the County's behalf; therefore, we expect the SCOOT to comply with its contractual obligations to the County and take additional steps to review these alternatives, Staff and I will be happy to meet with your staff and consultants to discuss the parameters of the additional work.

As you are aware, County Council asked the SCOOT to consider an additional alternative to the recommended Preferred Alternative G at its October 19, 2010 meeting. The County believes this request is consistent with the SCOOT's contractual obligations to the County and complies with NEPA. It is clear from your letter that you are unwilling to honor this request because you believe that the County's request "does not enhance mobility to and from James Island," and therefore, the request "does not meet the stated purpose and need" for the project. To the contrary, this option undeniably improves traffic conditions on James Island by providing an alternate route for James Island and Folly Beach residents and visitors to access Highway 17 and 1-526, Additionally, this connection to Johns Island would provide an alternative for traffic from Johns, Wadmalaw, Kiawah and Seabrook Islands to travel to other points without having to cross James Island. It is my observation that all aspects of the purpose and need statement could be met by implementing County Council's suggested alternative,

Charleston County is unable to determine if this is a viable option without a detailed analysis. I acknowledge that this option does not terminate on James Island; however, early on during the development of the OEIS, several options (i.e. Alternative 26) were evaluated that did not provide a direct link to James Island but were looked at to determine if they would provide traffic congestion relief. Again, as sponsor of the project, the County respectfully requests and expects SCOOT to undertake this evaluation.

Furthermore, as discussed with your staff, Council wants to proceed with the right-of-way acquisition of appropriate hardship and protective purchase cases. Precedence has been established to justify the advanced purchase of rights-of-way on this project. While I appreciate your concern regarding whether the South Carolina Transportation Infrastructure Bank will reimburse the SCOOT for these expenses, the three-party Intergovernmental Agreement the parties entered into in 2007 authorizes SCOOT to seek draw requests. I understand the County has pre-approved SCOOT's ability to make such requests to pay these eligible project expenditures. County Council made its intentions clear on this issue in a public meeting months ago, and the same was communicated to your staff the next day. Your staff was very receptive, indeed suggesting several methods by which these acquisitions could be undertaken. Therefore, it came as a great surprise to receive your refusal to purchase rights-of-way.

Based on these factors, Charleston County requests that SCOOT evaluate the alternatives outlined in the October 26, 2010 letter, and begin the necessary hardship and protective purchase acquisitions. Further, it is unnecessary to place the item on the agenda for County Council's consideration until SCOOT has completed what Council has requested of it. In closing, once SCOOT performs its supplementary analysis of the alternatives suggested earlier herein, Charleston County Council will provide the guidance to SCOOT of the alternative to pursue.

Once again, thank you for your consideration in this matter.