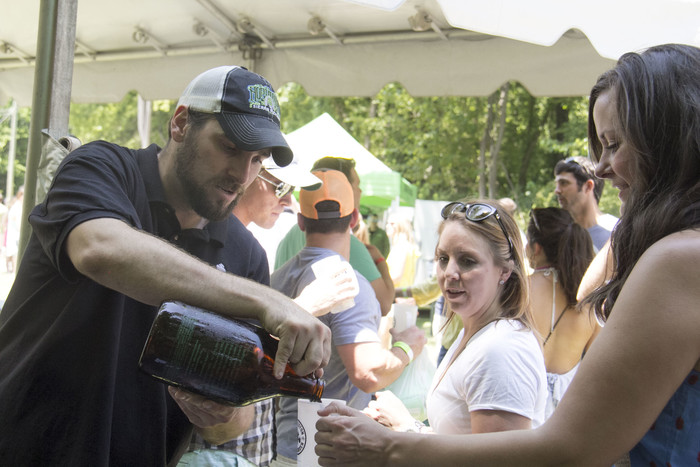 Homebrewers from the Charleston area and beyond will showcase their speciality suds - everything from pepper pale ale, peach sour, chocolate coconut stout and a raspberry ginger shandy - at the fifth annual Charleston Beer Garden on May 14.

More than a dozen homebrewers will provide samples in the Homebrewers’ Village while also competing for prizes and the honor of best homebrewer as determined by a panel of local judges.

The Charleston Beer Garden, a fundraiser for Lowcountry AIDS Services, is noon to 7 p.m. Saturday, May 14 at The Grove at Patriots Points in Mount Pleasant. The event features 20 breweries from Charleston, the Southeast and even some national favorites as well as retailers, food vendors and beer games such as cornhole, arm wrestling, trivia and giant Jenga. Local band The Dubplates will play throughout the day along with Andy Masker Band, King Sing and DJ Trail Mix.

Attendees can visit the Homebrewers’ Village for samples (while they last). Homebrewers will be competing in the "Best of Show" Homebrew Competition for the chance to win participation in a brew day at Tradesman Brewing and Holy City Brewing and a stainless steel grower from Yeast! Everything Homebrew.

The Homebrew competition judges are Chris Winn of Tradesman Brewing, Joel Carl of Holy City Brewing and Paul Roof, a local beer celebrity. Roof - and his mustache - are featured on the cans of Chucktown Follicle Brown by Holy City Brewing.

Participating in this year’s Homebrewers’ Village are:

General admission tickets include entrance to the festival, a commemorative festival mug, five beer tickets, and entertainment. VIP tickets include 15 beer tickets, plus a separate VIP entrance, access to the VIP Oasis and VIP swag bag. This event is for ages 21 and up only. For more information and to purchase tickets, visit www.charlestonbeergarden.com.

Proceeds from the event will support Lowcountry AIDS Services in its work helping people living with HIV/AIDS in the greater Charleston area as well as its community outreach, education and prevention programs.