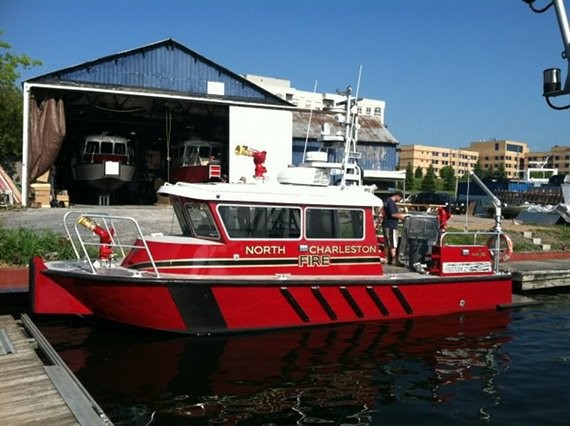 4:12 am on Tuesday July 3, 2012
North Charleston Fire Department to dedicate and demonstrate area’s first fireboat at 4th of July Festival

Image by City of North Charleston

The North Charleston Fire Department will dedicate the Lowcountry’s first fireboat at North Charleston’s 4th of July Festival with a short ceremony on Wednesday, July 4, at 3 p.m. along the Cooper River at Riverfront Park. NCFD will showcase the fireboat’s capabilities immediately after the ceremony.

The 32ft purpose-built fireboat will be named in honor of Retired North Charleston Fire Chief W. Frank New who lead the department from 1973 to 1985. The fireboat will join the NCFD fleet as “NCFD Marine 1.”

The fireboat, model FireStorm 32, was built by Metal Craft Marine in Kingston, Ontario. It is powered by dual Cummins diesel engines, each rated at 480 horsepower, which were manufactured at the Cummins Turbo Technologies facility on Leeds Avenue in North Charleston, SC. Its top speed is 43 knots or nearly 50 MPH and can pump more than 2,000 gallons of water per minute through 4 water monitors mounted on the roof, bow and two on the aft deck.

The fireboat can traverse and operate in very shallow water due to its shallow draft and jet drive configuration. The aft deck provides an oversized dive platform/recovery deck, which provides water level working space for deployment and recovery. The cabin is equipped with VHF, radar integrated with GPS, infrared capabilities and high output scene and spot lights for night operations.

The fireboat dedication is part of North Charleston’s 4th of July Festival, which boasts a full day of top level musical entertainment and family and children activities. The Festival concludes with the largest show of fireworks in the State of South Carolina.