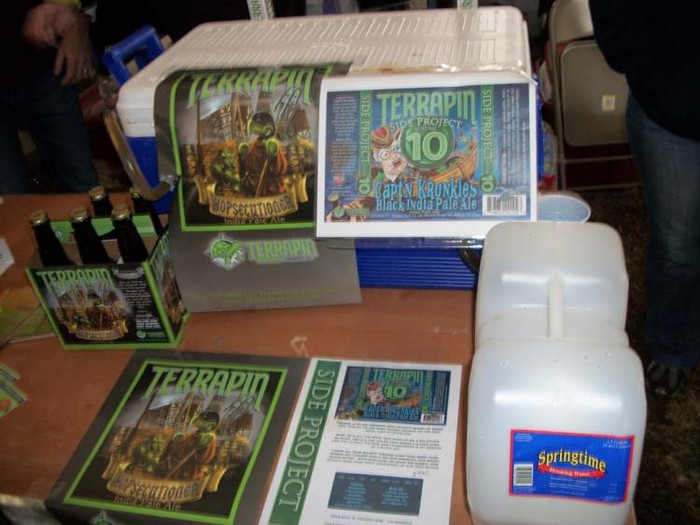 Image by Me On the bleeding edge of copyright law...

Black IPA (or India Black Ale, according to the Brewer's Assocation) is a young style, with an early example being Stone Brewing's 11th Anniversary Ale, which morphed into their Sublimely Self-Righteous Ale.  As craft brewers continue to push the envelope in all directions, it's really a natural follow-up to India Brown Ales like Boulder Beer Co.'s Flashback, or even Terrapin's Hop Karma IPA.  You can almost replay the planning sessions in your head:

"Well, we maxed out the hops.  Any more IBUs and we're just wasting money, humans can only detect so much bitterness.  What do we do next?'

All innovation is good innovation, and IBA is no exception.  But the labels and the categories and the innovation don't matter if the beer doesn't taste good.  And oh my, does Capt'n Krunkles taste good.

It pours, well, black, with a scary molten-chocolate brown head, which really throws you for a loop when you smells its huge floral citrus nose.  I swear to you people, this beer reminds me of crunch berries.  Somehow the big roasty malt notes slam into the fruity hop notes to create this balanced fusion that my palate cannot get enough of.  I fell in love with this beer at Brewvival, and the love affair continues.  I've been eyeballing the second bomber of this I've been keeping in my fridge since swooning over the first one.  Don't tell my wife, but I'm gonna rent this beer an apartment close to the office.

7.5% ABV, B+ from BeerAdvocate, and a 96 from Ratebeer.  I scoured the reviews for mentions of crunch berries, but I found none.  The closest reference I could find was to tropical fruit.  Maybe I'm crazy, or maybe it's the clever marketing, but you can't prove either one unless you try it for yourself!