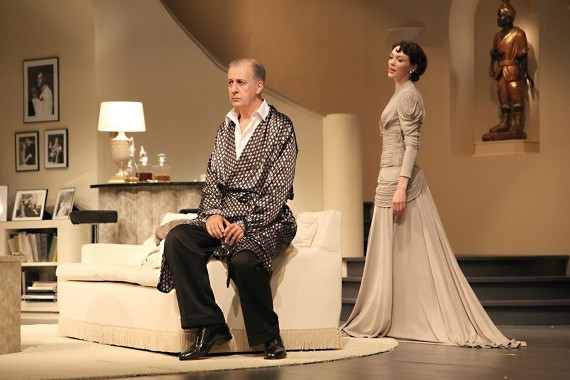 "Well it sold out in Ireland". That's all I needed to hear while walking into my hotel to know what the group of tourists were talking about: "Present Laughter."

Read more stories on this subject in our Spoleto topic page.The recently reopened Dock Street Theatre was the backdrop for the drama, which couldn't have been a better setting. The intimate old fashioned theatre set the scene for the comedic drama that takes place in the early 1900s.

Meet Garry Essendine. He's suave, a lady charmer, theatrical star, and worse, in a mid-life crisis. Blurring the lines of his true self and his acting self, Garry can't bear the thought of losing his luster. I could just hear the words to the Toby Keith song in the back of my mind: "I ain't as good as I once was, I got a few years on me now". It's no secret to those around him, and what begins as an innocent decision, quickly snowballs to affect everyone around him, turning his life upside down; and therefore hilarity ensues.

"Present Laughter" was a montage of snide remarks and snarky comebacks that kept the audience chuckling throughout the play. Although Essendine was both the center of the show and his universe, it was often the small remarks of the supporting cast that kept it fresh. My favorite, and one who I could've stood to see more of, was Miss Erikson, Garry's housekeeper and a Scandinavian spiritualist, who only removes the cigarette from her mouth to put one in, and whose dry sense of humor you can only help to laugh at.

The show will be playing several times over the course of the next two weeks. Keep in mind that it's a two and a half hour show with a fifteen minute intermission.

Tickets to the show are available through Spoleto Festival USA's site.