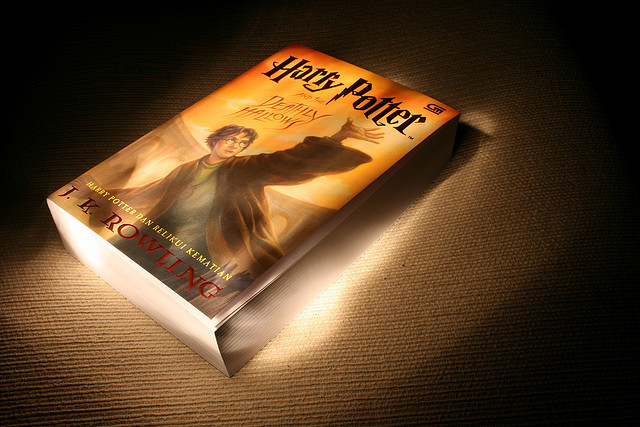 2:02 pm on Wednesday November 10, 2010 | Posted by Ken Hawkins
Love the Harry Potter realm? Then the Charleston library is the place to be

Image by Flickr user ThroughTheHeartOf∆Photographer Come get your Harry Potter knowledge on.

As we approach the release date of the next movie installment in the Harry Potter series the list of local revelry continues to grow.

The latest announcement is the coming of "Harry Potter’s World: Renaissance Science, Magic and Medicine" to Charleston. Charleston County Public Library is one of a dozen libraries nationwide chosen to host the exhibit about the mystical wonders of Harry Potter.

And if you're above the age of a teenager don't feel compelled to gloss over this one, the series appears to have some fun yet quite knowledgeable topics to be discussed. Topics range from trivia contests, to general Potter interest, to ethics, to links between alchemy and modern medicine.

The exhibit opens at the main library at 68 Calhoun Street on November 17, and a special celebration is planned Thursday, November 18 (movie release night) from 4-6 p.m. with children’s activities, games and light refreshments. Potter fans are encouraged to come in costume.

Several free programs are planned for Potter fans of all ages, from the release:

Celebrate the Magic of Harry Potter - Exhibition Opening,
Thursday, November 18 from 4-6 p.m.
(Main Library Lobby, 68 Calhoun Street)
Join the festivities as CCPL celebrates the opening of the national traveling exhibit Harry Potter's World: Renaissance Science, Magic and Medicine. Dress in costume, enjoy children’s activities, light refreshments and be one of the first to experience this new exhibit. The exhibition explores Harry Potter's world, its roots in Renaissance science and the ethical questions that affected not only the wizards of Harry Potter, but also some of the great Renaissance thinkers.

Harry Potter Trivia Party,
Thursday, November 18 at 4 p.m. and Saturday, November 20 at 11 a.m.
(Main Library Children’s Area, 68 Calhoun Street)
Hop on your Firebolt and join us in the Children's room to celebrate all things Harry Potter. Test your Potter knowledge, enjoy crafts and win prizes. Kids are encouraged to dress up like their favorite Harry Potter character.

See the Chemistry in Harry Potter’s Magic!, Monday, November 22 at 6:30 p.m.
(Main Library Auditorium, 68 Calhoun Street)
Witness the mystical world of Harry Potter’s magic through experiments like “The Clock of Repeating Time,” “The Glowing Slug Spew,” and “The Bubbling Brew of Acid.” Experiments to be presented by College of Charleston students in the Gamma Delta Chapter of Alpha Chi Sigma, a professional chemistry fraternity.

The Real Harry Potter: Magic and Witchcraft in Pre-modern Europe, Thursday, December 2 at 6:30 p.m.
(Main Library Auditorium, 68 Calhoun Street)
Belief in magic and witchcraft were commonplace in Renaissance-era Europe, with people frequently relying on spells and charms as they faced the hazards of everyday life. Join Dr. Jason Coy of the College of Charleston history department as he explores these phenomena, revealing the historical bases of the magical practices featured in the Harry Potter novels.

Harry Potter, Alchemy and Modern Medicine, Wednesday, December 15 at 12 p.m.
(MUSC Waring Historical Library, 175 Ashley Avenue)
Dr. Wayne Weart will explore the links between the alchemists of the past and the apothecary of yesterday and today, including a look at some of the signs, symbols and tools that have evolved over several centuries. Reservations required. Call 792-2289.

The library will host the exhibit in the Main Library Lobby through December 12. It will be moved and open to the public at the Medical University of South Carolina’s Colbert Education Center and Library, 171 Ashley Avenue, from December 20-January 7.