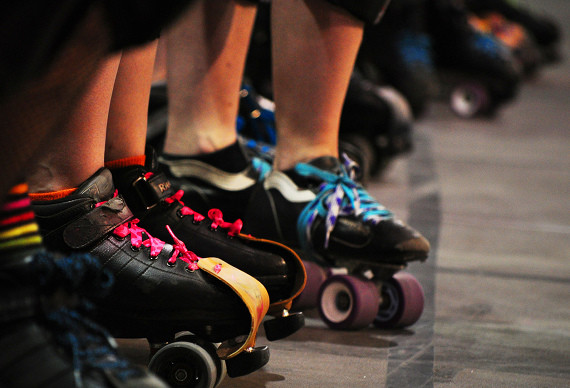 8:40 am on Sunday October 17, 2010 | Posted by Amanda Click
HighRollers breaking out the Southern Hostility for their final bout of the season (update: photos)

Update October 15: It's been a few weeks since the game (both Lowcountry HighRollers teams beat the visiting Palmetto State Roller Girls from Myrtle Beach, with the LCHR Swamp Foxes beating the LCHR Holy City Heartbreakers in the end) and I've just spotted a set of lovely shots from the bout from photographer "ShutterPunk253;" take a gander here.

First reporting September 14: The Lowcountry HighRollers invite you to their last bout of the season on Sunday, September 26th featuring their first tournament-style bout.

The league brings back its two home teams: The Holy City Heartbreakers and the Swamp Foxes. Throw in Myrtle Beach's Palmetto State Rollergirls, and you've got yourself some serious Southern Hosility.

At the final bout will be plenty of beer, DJs Butch Cassidy and the Sundance Kid and live music from local hard rock cover band Dante’s Camaro. There will even be a a special visit from Cool Ray, the Charleston Stingrays’ mascot, plus a raffle with great schwag from the derby's sponsors.

Don't toss your ticket stubs away cause they'll get you into the post-bout after party at The Music Farm.

As always, the bout will be held at The Citadel's McAlister Field House located at 171 Moultrie Street. Doors open at 4 p.m. and the bout begins at 5 p.m.