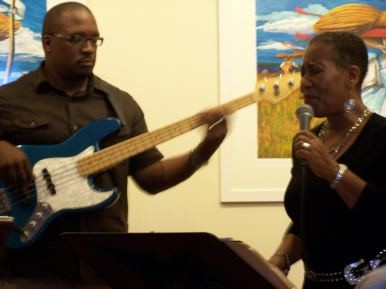 Feet are tapping, hands are patting, heads are bobbing and all is good in the world; because Ann Caldwell has taken the stage.

It was a hot, packed room at Gallery Chuma for John Street Jazz with Ann Caldwell and the "LooseFitt Band", but that didn't seem to bother anyone. If you could've managed to clear a few more feet of space, then you may have found most of the room dancing to the soothing sounds of Caldwell.

Playing to a sold-out audience at Chuma Gallery, Ann Caldwell represents the rich, soulful sounds of American jazz that have made it what it is today. Following legends like Duke Ellington, Ann's music is deeply rooted in old fashioned jazz music. Much of her music is upbeat, yet it inspires in such a way that it makes you want to just close your eyes, bob your head and just take it all in.

One of Ann's greatest attributes is her ability to connect with the audience, both in song, but also by talking with the audience. Many of her lyrics reference Charleston and South Carolina, since she's a Charleston resident. Throughout the show she shared jokes with members of the audience, making it a warm and inviting performance.

If you missed Saturday's show, Ann and the LooseFitt Jazz Ensemble will be back at Gallery Chuma (located at 43 John Street) on Sunday, June 6th for performances at 3:30 and 5:45 p.m. Tickets are $21 each and include complimentary drinks and heavy hors d'oeurves from Gullah Cuisine Restaurant.