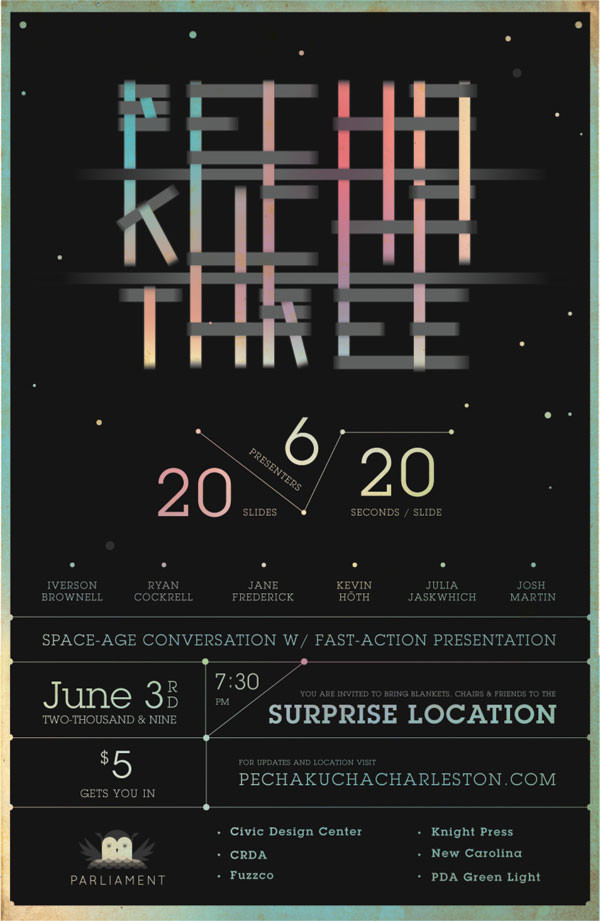 Image by TheDigitelImage by 20090527-pecha.jpg The topic can be whatever the presenter likes, as long as they stick to the 20x20 format.

Update June 1: The location has been announced: In front of the Gaillard at 85 Calhoun Street.

Here some details about what to expect: "Parking at Gaillard Auditorium Garage. Please do not park in the adjacent neighborhoods. We encourage bicycle riding and walking to the event. Bring blankets or chairs and bug repellent. Although there won’t be alcohol D’Allesandro’s will be there selling pizza and non-alcoholic beverages!"

Profiles of the presenters are also on their site.

Tickets are still on sale for $5 each.

They have yet to announce a location, but say it will be unveiled on June 1. But, here's a hint from their Web site: "All we can say now is that you should plan to bring your lawn chairs and blankets (and because this is the Lowcountry and it’s June) some mosquito repellent. We’re starting this PKN later so it will be dark enough to see the presenter’s slides."

Pecha Kucha Night returns to Charleston for a third time on Wednesday, June 3.

What is Pecha Kucha?

It's a gathering of Charleston creatives. The idea is to network and share ideas. The hope is to create a stronger community.

Ten or so speakers will each share 20 images for 20 seconds each. It's enforced. -- So it's an efficient affair running 6:40 for each presenter.

It's a lot of fun, we highly recommend it.

You can learn more about the event in our Pecha Kucha archives, and on their Web site.

Ticket info and venue have yet to be announced. We'll keep you posted, as always.

Meanwhile, Beaufort's getting together their own Pecha Kucha Night. Expect it in October.