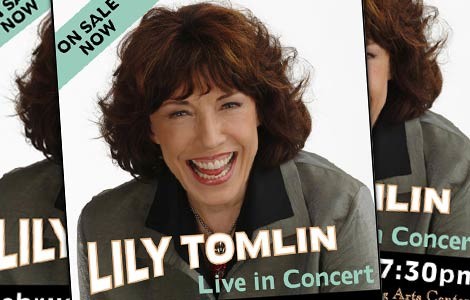 Tony Award- Emmy Award- and Grammy Award-wining comic Lily Tomlin is visiting Charleston for her first time, and will perform her new one-man show "An Evening of Classic Lily Tomlin."

The Post and Courier chatted with Tomlin and describes her show, in part:
Describing her latest work as featuring 10 or 12 character monologues, she says some autobiographical material is tossed with a smidgen of interaction with the audience. Some of her familiar characters will make a return appearance. For example, Ernestine, the irascible telephone operator on television's "Laugh-In," has been updated and now is the person who answers the phone for a major insurance company, where she spends her days happily declining sick people's claims.

The show goes on at the North Charleston Performing Arts Center on Thursday, February 12, at 7:30 p.m.

If you're willing to register on The Charleston City Paper's Web site, they're giving away some free tickets -- presumably by a drawing.

The North Charleston Performing Arts Center is at 5000 Coliseum Drive.