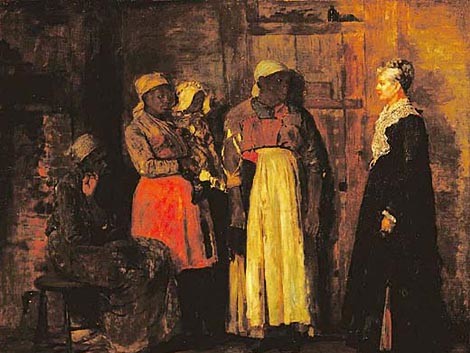 Image by Winslow, 1836-1910/Smithsonian American Art MuseumImage by 2008055gibbes.jpg American artist Winslow Homer painted "A Visit From the Old Mistress" in 1876. He displays tensions between white plantation owners and their former slaves. The grandeur and idealism of earlier paintings was gone, replaced with a more sober view.

Northern landscape paintings of the early 1800s were often grand in scope, especially when compared with landscapes coming from the South. Those were often less grand, less sure. Vast, sun-filled valleys of the Northern painters seemed replaced by slaves in the cotton fields and plantation homes that oversaw the fields.

As slavery collapsed, so did the direct view of the plantation in the forefront of the fields. The role of the plantation is something the Gibbes seeks to explore with its exhibit, Landscape of Slavery: The Plantation in American Art. In the museum's words:
The exhibition considers plantation images in the context of the history of landscape painting while addressing their impact, both real and perceived, on race relations in the United States.

It's an interesting thought that Charleston magazine explores in their May issue.
Another traditional view is Alice R. H. Smith’s Sunday Morning at the Great House (circa 1935), which depicts black servants being greeted by the plantation owner and his family in a kind of receiving line outside the manor house.

The painting is the visual equivalent of a serenade, a gentle rhapsody of washed pastels in which nothing jars or discomfits the viewer. Gigantic live oaks create a kind of protective canopy over the people assembled. In the background, a minister surveying the scene from a second-floor piazza conveys a benign but secure authority.

That view was quickly fading and being replaced with more views by more contemporary black artists, such as E. A. Harleston, whose father was a white planter and whose mother was black.

Charleston magazine continues:
Harleston could look at icons of times past and see both the white view and the black view of the same scene. Through the eyes of just about any other artist, his Boone Hall Plantation (circa 1925) would most likely be pretty traditional.

Harleston’s perspective has conventional elements, to be sure, yet it is a view as much of majesty as of decay, and the landscape surrounding the grand home seems almost to evaporate at the edges.

The exhibit runs from May 9th to August 3rd. Admission is $9 for adults.

Also, be sure to view Charleston magazine's slideshow of some of the works on display.