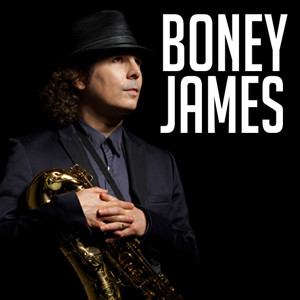 Boney James dislikes labels and refuses any and all of them. “In fact, I have never thought of myself as a ‘jazz’ artist specifically,” he says.

Of course, this statement may serve as a source of confusion for the musician’s legion of fans that have scooped up over 3 million copies of his twelve albums (with eight of them going to No. 1 on the Billboard Contemporary Jazz Chart). It also may seem contradictory to the respected opinions of music critics who consider him one of the most influential jazz artists of his generation. In 2010 Billboard Magazine named him “The No. 3 Top Contemporary Jazz Artist of the Decade.”

Even so, Boney James, who has four Gold albums, three Grammy® nominations, a Soul Train Award and an NAACP Award nomination to his credit, says, “I am just a saxophone player whose music has several different influences. Jazz is only one of them.”

This incredibly accomplished artist — who broke into music in the mid-80s touring with acts such as The Isley Brothers, Morris Day (The Time), Randy Crawford and Teena Marie, and emerged as a solo force in 1992 with his breakthrough debut, Trust — has long been influenced by contemporary R&B.

Head to the source at charlestonmusichall.com