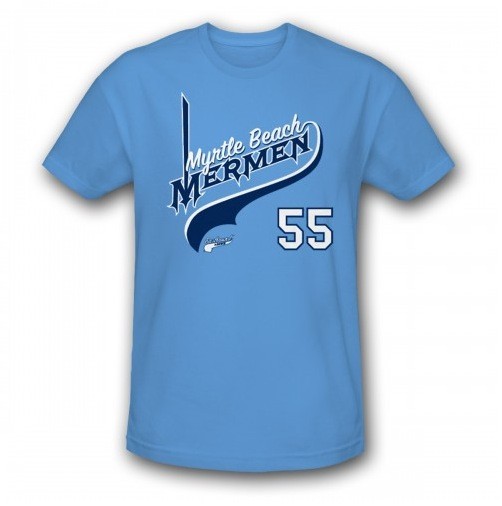 I've never watched a full episode of Eastbound & Down, just clips I've seen on the internet so I watched the show and took some notes from a local's perspective.

There are perhaps some spoilers below. I wouldn't know what is a spoiler or not because I've never really seen any past episodes.

The first couple minutes of the show are spent showing what I assume are scenes from last season. Since I don't know who any of these people are, aside from Kenny Powers of course, it's not really helping me catch up to the story line. Once the show actually starts, Myrtle Beach is front and center. A sweeping aerial shot is centered on our new crown jewel, the SkyWheel. Next is a series of jump cuts to landmarks like Planet Hollywood, House of Blues, and Bennett's Calabash. Then, keeping true to the theme, a shot of the lobster van in front of the empty (and now mysteriously burned down) Seafare Restaurant. I also noticed Derriere's Gentleman's Club and the crown jewel of 501 heading into downtown: the bright pink Bunny Ranch.

The beach scene we saw in the teaser trailer with Kenny proudly carrying his confederate flag pot leaf body board happens. It's some funny joke nodding to the movie "Point Break" and the crude language is flying as expected. We finally get into some baseball action. It's neat to see locals and local businesses in the BB&T stadium. Jason Sudeikis of Saturday Night Live fame shows up in the locker room as Shane. There's a fair amount of homo-phobic jokes before Kenny and Shane hit the boulevard and get boobie flashed by some ladies on the sidewalk right in front of Plyler Park. There's a weird scene where Shane and Kenny pick up some groupies from school (looks like CCU) and take them to the beach. The girls must have been locals because they were not really great actors. Noticeably so.

Half-way through the thirty minute-episode and it looks like they are picking up the story line from last season where Kenny visits his baby's one-year birthday party and he's clearly out of place. It's a little bit sad and definitely more awkward than funny. Kenny returns to the beach depressed and I think I'm also a little depressed from watching that last few minutes. April shows up in Myrtle Beach with the baby unannounced. Kenny decides to get a babysitter and take her out "for a bomb ass time in Myrtle f#^@*ing Beach." At this point, April and Kenny go on an alcohol and drug fueled tear of "putt-putt", go carts, and a visit to Family Kingdom (they don't say or show that it's Family Kingdom in the show). The next day is the end of this episode and Kenny wakes up to find April has skipped out and left the baby with him.

Knowing what I was getting into, I think the show didn't portray Myrtle Beach as anything too far beyond the truth. In fact, the most wrong thing I can remember seeing is a woman wearing a thong swimsuit on the beach.  As far as the actual entertainment value of the show, the jury is still out. If Myrtle Beach wasn't a key feature, I don't know that I would seek out the second episode. ﻿It felt like there was a lot of time wasted on ramping up the story line but I wouldn't want it to be constant crude banter, either. I'll just have to wait until next week to see.