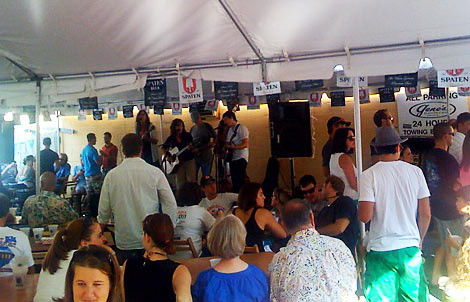 The fall beer season kicks off with Oktoberfest, of course. A German tradition spanning 175 years, those lucky few in Deutschland will be celebrating sixteen days of drinking beer.

Gene's Haufbrau in West Ashley opened their doors for their annual celebration of the Oktoberfest, Sunday September 28, 2008. Starting at noon, the beer and the bratwurst started floating. Blocking off the adjacent parking lot, festive tables and a huge beer tent welcomed those decked out in lederhosen. The Hans Schmidt's oompah band got the biersteins dancing, while the beer tank kept the brews flowing. Gene's also had a huge grill out in the parking lot, turning out bratwurst, knockwurst, Polish sausage, and even hot dogs – all with sauerkraut of course!

As the sun went down, the crowd welcomed the Radio Pirates (a Cary Ann Hearst gig) while they continued to drink and scratched their sunburns. Today was a beautiful day! The team from Gene's threw out promotional items and the teams geared up for the girl's beer wrenching and men's sausage eating contests. The lucky winners from both were donned the Oktoberfest 2008 King and Queen. Burp! The Wild Turkey American Honey promotional girls were there, offering discounted shots, and then the day turned into night. The massive Oktoberfestin' crew headed indoors to enjoy Funk and Motown covers by Charleston's very own: The Secrets.

Gene's Haufbrau in West Ashley does Oktoberfest right every year. Be sure to catch them in 2009!!