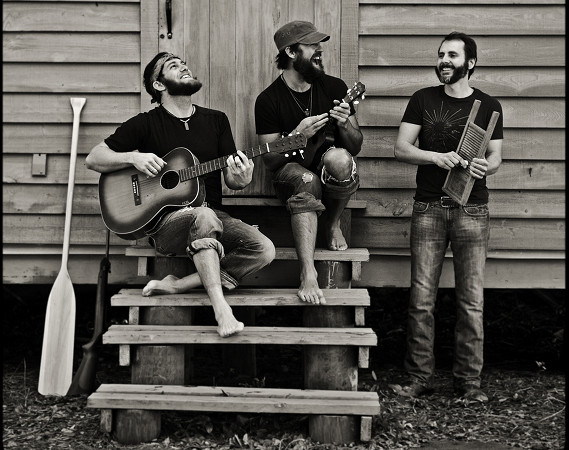 4:42 am on Wednesday November 10, 2010 | Posted by
Dangermuffin's different jams pave way for success

Jam fans planning to pack the House of Blues to experience the improvisational skills of moe. need to stop and double-check the time printed on their ticket. That’s because showing up late to Friday’s show may mean missing a chance to catch one of S.C.’s best up-and-coming bands, Dangermuffin.

The Folly Beach-based Americana act has made a strong name for themselves in the region, toured relentlessly across the U.S. and garnered radio play all over the world. Made up of award-winning songwriter Dan Lotti, guitarist Mike Sivilli and drummer Steven Sandifer, the trio is in the midst of touring in support of their third studio album “Moonscpaes” which has won acclaim across the Palmetto state and beyond.

ListenUp spoke with Sivilli recently to talk about the band’s music, discuss the scene in S.C. and admire the trio’s choice of facial hair. Here’s what he had to say:
Tell me a little bit about how Dangermuffin came together?
Well, primarily it started with Dan and myself really just playing shows together, doing a dual guitar thing.

I met Dan in Charleston about 4 years ago and it just happened that I was in between bands and he had a bunch of new songs and we just to develop them and eventually it turned into more of a band when when we added our first drummer.

How does living in Folly Beach shape the music you make and what you guys are doing as a band?
Well it has certainly played a large role in the band and in “Moonscapes” our most recent record.

We’ve all lived here a few years now, and its just this tropical island with a tranquil environment and no matter what you do it just gets into everything your create.

I mean I can hear the waves crashing and look out and see the pier and the sun shining right now, and that’s just an environment that’s alot different than if you were in a city hearing car horns honking and all that.

I think that there’s definitely a spirit in the lyrics that Dan wrote that is pulled from the flow of energy in this area, and there are even some direct beach references in those songs. Just be here certainly helps with the flow of the music and is a part of it.

How would you compare the music scene down there to what you’ve seen in Myrtle Beach?

We’ve played in Myrtle Beach quite a bit — or at least the greater Myrtle Beach area. We’ll do Quigley’s in Pawleys Island, we just played Hot Fish Club in Murrells Inlet and we’ve done Droopy’s in Myrtle Beach. We’ve done a bunch of stuff there but we haven’t really found the perfect venue for what we’re doing up that way.

We really like to play our originals and put together a set of music that we can go out and feel good about and some of those places are more of a bar, where folks are just there and not really an original music crowd like we’re used to having.

In Folly Beach, there’s huge original music scene and I think that’s really the difference. Every night of the week there’s live music and sometimes 5 or 6 bars on the same night. It’s very much like an artists’ community.

What’s your impression of South Carolina as a platform for launching bands and helping you get noticed on a larger scale?

It’s been great, absolutely. The last few show we’ve done in Charleston were near sellouts and we’ve seen a lot of success here and there’s alot of good markets in this region.

It’s something were focusing on now having gone all over the county touring and having established a significant regional presence in this good circle of viable markets like Asheville or Atlanta or Wilmington or Raleigh. It’s a great place ... at least for now.

We’ve kinda become smitten with out west lately playing out in the Rockies and in the pacific northwest in places like Oregon. We’ve seen some pretty fantastic stuff out there playing large festivals and things and sometimes pulling large crowds there bigger than back here.

But, it’s an awesome place and we try to give it it’s due respect and definitely don't take it for granted. Folly beach is this kind of hidden gem. Most folks know us as a surf community or a place to go to the beach near Charleston, but its got this identity as a small island with an interesting history and as a place that’s really nurturing for the artist. There’s a lot of great acts coming out of folly beach right now.
You’ve got a pretty busy stretch here in the next week or so, heading up the coast for shows in Pennsylvania, New York, Maryland, etc. Do you guys get excited to play those type of shows or is tough going into places where maybe you’re not as well known?

We’re definitely excited. Some of these venues and town are places we’ve not been to and don’t really know anybody. But you talk to the show promoters and they’re really excited because they’ve got fans asking for us who’ve heard us on Sirius or saw that we’re opening for moe. or heard some of the other things going on with the band.

To know that there’s already that energy trying to happen in places we’ve never even been, whether it’s 10 or 20 or 50 or 100 folks that might come out, its still a very strong vibe and a sign to us that we’re on the right path.

What about Brooklyn? You are playing up there in what is sort of hipster capital of the world. Is there a place for laid back acoustic jams up that way?

That’s a good question really. We’ve done OK in Manhanntan, because I’m actually from N.Y. and Dan lived up there awhile and so we know some folks and have some friends.

It’s just the epicenter of everything and it’s fun to get there and really see what’s happening. We’ve had some good shows there at the Mercury Lounge and in Manhattan but it will be interesting to see how Brooklyn goes.

It’s just really an ongoing thing to find your venues and your crowd, make your niche and make a couple good contacts and really just go play and enjoy what you do.

Are you excited to be playing with moe. on Friday night?
It’s pretty exciting to play up at House of Blues. We’ve never played there before, we did one up in Chicago once but not the one in Myrtle Beach yet.

And I actually used to be a pretty big fan of moe. when I was younger, so that will be exciting. They’ve obviously played a large part of the evolution of the sort of grassrootsy type band, so it’s an honor to share the stage with them.

They did really need a lot of radio play or MTV or whatever to make it happen as a band. They just work hard, play good music and they’ve built their following that way, whic is really what we’re trying to do.

What can folks expect when Dangermuffin takes the stage Friday? Is it more of an improvisational jam or do you stay a little more structured with your shows?

I’m going to steal a phrase from an article written down here in Charleston on us this summer where they coined us as “the future of jam bands.”

And I only say that because they went on to explain that with what has become synonymous with the jam band scene is the long extended jams and the instrumental exploration and the 20-minute songs and we don’t really do that.

We have legit songs that are 3 to 5 minutes for most and are very powerful from a vocal and lyrical perspective and I guess that makes us a little bit of a rarity for a jam band crowd. A lot of times its focused on the groove and the vibe first, more than the lyric and hook of the songs.

I think what gets us lumped in with a lot of those bands is the cross-genre stuff we do, where we’ll do sort of a reggae song, then a straight little Americana/bluegrass jam and move on to rock ‘n’ roll and just sort of mix it up with the beats and rhythms.

There’s a mentality to being part of the jam culture, and we’re not a showmanship sort of band — we don’t wear matching suits or practice our dance moves — it’s all about the music and the community and the fans tend to relate to that.
You guys have put out three albums in three years, do you already have another one in the works or what’s next for the band?

We actually do have more stuff in the works, but there’s no timetable for it or anything. For us, that creative process is very important and so we do it for ourselves and to keep the freshness of the live show and to be able to incorporate more of those new songs into the show.

I don’t think you’ll see much of that Friday, but over the winter we’ll definitely be working those in and writing more. For this show we have a limited time slot, so I think we’ll just come out swinging play the hell out of some songs from “Mooscapes” and “Beermuda” and try to give them what they want.

In every photo of your band, you guys all have awesome beards. Is facial hair an important part of the Dangermuffin aesthetic?
You know what they say about the beards, right? They grow on you. (Laughs)

I’ve actually trimmed mine a bit since the fluffiest days, it tends to get kind hot and itchy you know.  It’s not like an official rule or anything, but I don’t know it’s just kinda something that is who we were and some people seem to like it.

Anything else you’d like folks to know about what else Dangermuffin has going on?

Well, like I said it’s nice to know that they’re playing us on Sirus on tow different stations JamOn and one called Outlaw Country — it’s strange how that works out with the whole cross genre thing. Were’ gonna do an in-studio live session with JamOn while we’re up in New York, so keep an eye out for that on Sirius and if you get a chance come out to the show Friday.