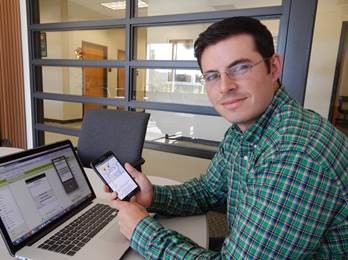 10:21 am on Friday January 30, 2015 | Posted by The Citadel
Citadel veteran student becoming a leader in the computer science program

A veteran student at The Citadel is working on a way for people who witness a crime or a dangerous situation to help alert others nearby via their smart phone.  Patrick Ayres is now working on the final stages of an award winning app he designed called Crime Watch, to make it a functioning, downloadable, crime-fighting mobile application that is available to the public for free.

He’s looking to take Crime Watch to the next stage after being awarded two prizes in the 4th annual Mobile Application Development Competition.  The contest was held in late 2014 and Ayres’ app was awarded top prize, as well as the Attendee Favorite prize. The 2014 competition was organized by the Charleston Defense Contractors Association and included an award of $3,250, which Ayres can now put toward further developing Crime Watch.

This is how Crime Watch would work: if an emergency situation is witnessed, users could go into the app and upload a description of the event. The app would automatically drop a pin at their location on a Google map with the description. Examples of situations in which the app could be used include a suspected drunk driver, an active shooter, or a purse-snatcher.

"I was inspired to create my mobile application after seeing several school shootings in the news.  It made me think of the active shooter situation we had while I was stationed at Fort Sam Houston and working in the emergency room of Brooke Army Medical Center,” recalled Ayres. “People were calling in saying there were multiple shooting victims and multiple suspects, when really it was a single shooter and a single victim.”

Ayres remembers how chaotic it was at the time.  “We were trying to find out what was really happening on the base and trying to react to the changing information. I thought there had to be better ways to let people near an active crime scene know what was happening. Crime Watch seems like a viable solution.”

Before becoming a student at The Citadel, Ayres spent almost six years in the army as a medic. He left military service as a staff sergeant in 2013 and began his college education in San Antonio, Texas before moving to Charleston with his wife. He was accepted at The Citadel in spring 2014 and is now a junior. His chief focus right now continues to be improving Crime Watch and making it available to the public.

“I plan to add a few additional features before I release it on the marketplace for free.  In the future, I hope the app can help protect people by giving them up-to-date knowledge of danger nearby,” said Ayres.

When accepting his awards for Crime Watch, Ayres credited his faculty advisor, Professor Deepti Joshi, Ph.D., for supporting the project. "It is an honor that Crime Watch was selected as the winning mobile application design. I would like to thank the computer science faulty at The Citadel for their encouragement, especially Professor Joshi who was my mentor for the project."

Ayres plans to graduate from The Citadel in spring 2016 with a bachelor’s in computer science and a minor in business.

Megan Campbell is a graduate assistant in the Office of Communications and Marketing at The Citadel. She is currently working toward her master’s degree in secondary education with a concentration in English.

I like to say Congratulation to Citadel veteran student to becoming a leader in the computer science program. He is very talented and expert in Computer science and other aspects related to this field of work. Actually, I try to buy essay papers online but i like to read about his Education detail and other features which help to get this position.

I like to say Congratulation to Citadel veteran student becoming a leader in the computer science program. He is very capable person having a lot of great skills. Actually, I find a good research paper writing service but as a student i must follow him to become a leader in future.