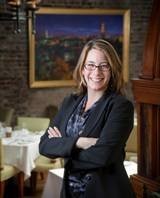 4:44 am on Thursday March 24, 2011
McCrady's welcome new general manager with a Charleston past

A Lowcountry leader in Southern fine dining, McCrady’s Restaurant is excited to welcome Kellie Holmes as the new general manager.

Holmes brings her years of hospitality experience accrued from all over the country back to where her career got its start. Her first restaurant job was working as a server at Louis’ Charleston Grill while she was attending the College of Charleston in South Carolina. She relocated to Atlanta after graduating and went on to work as a server and bartender at other area eateries, and eventually landed at Bacchanalia, where her passion for fine dining flourished.

In 2002, she moved to the Napa Valley, working at ZD Winery as a bartender at the Martini House and a captain at Terra Restaurant, both in St. Helena.

Each of Holmes’s earlier positions prepared her well for her move to San Francisco in 2005 to become assistant sommelier at Ame restaurant in the St. Regis Hotel, the second restaurant from the owners of Terra. By 2006, she had also assumed the role of manager of the restaurant, gaining valuable experience in overseeing the day-to-day operations of a fine-dining establishment. This experience led her to the renowned A16 restaurant in San Francisco in 2006, where she remained for the next four years. In addition to managing over 30 staff for the 110-seat restaurant, Holmes worked closely with the culinary team and wine teams to ensure a superior guest experience. During her time at A16, the restaurant’s executive chef was awarded a James Beard Rising Star Chef award, as well as nominated for the award for Outstanding Wine Service.

Bringing her expertise back to Charleston, and the award-winning McCrady’s, Holmes is excited to return to the city that helped launch her career and to be a part of a team that’s known for its exceptional service and cuisine. “When a dining room is full and your staff is proud and happy, and your guests are excited to be there, those are the best moments,” she notes. “The people are by far my favorite thing about my job; facilitating a great experience for my guests and staff is what it's all about.”