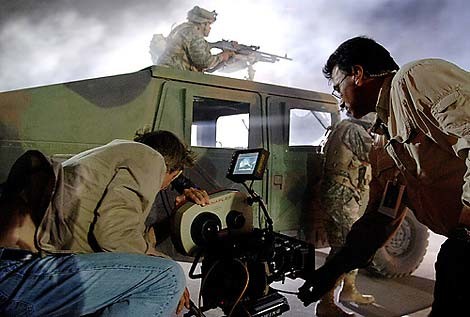 Image by U.S. Air ForceImage by 20080922movie.jpg S.C. is being eclipsed by other states' efforts to attract films. Here Transformers is filmed at Holloman Air Force Base, N.M.

Questions are swirling around how -- and how we fail -- to attract film production in South Carolina.

The impetus for much of the concern was how Lifetime Television has threatened to move its filming of "Army Wives" out of state after South Carolina moved to cut tax incentives for out-of-state film workers.

Most states offer at least some sort of filming incentive and though our state does have $15 million invested in incentives, industry officials say our state's unwillingness to guarantee those savings keep studios hesitant. After all, who wants to build a multi-million dollar facility only to have the incentives to use it be yanked a way?

But it's not simply that we're a stingy state, there's a lot of debate as to how much of the money that comes along with film crews actually stays in our state. One study said we get nearly $4 for every dollar we spend, another said we lose money.

And there's also the matter of developing a pool of local talent for studios to have ready access to should they decide to film here, but to develop that our state needs to have more movies produced -- it's an obvious paradox.

The Post and Courier did some digging on why things are so, and it's pretty illuminating, go read it.

To me, it seems obvious that if South Carolina wants to get serious about movie production it needs to do more than talk a big game and commit to investing some serious money, even if the payout may take 10 or 20 years.

The reason to do so seems obvious as the movie industry is a great fit for Charleston's warm, attractive, sandy, and historic community. Plus it could do wonders for expanding our already strong tourist economy.

Connecticut recently upped one of its filming incentives to be a 30% tax credit on expenses (vs. our 20%) and has been enjoying it, The New York Times writes:
Then in April, Connecticut’s General Assembly approved more film-production incentives, including spending $2.6 million on a film training program that would provide hundreds of in-state certified union workers to studios.

Since the tax credit was enacted, the state has benefited from half a billion dollars in related spending from more than 70 feature films, commercials, documentaries and television shows, said George Norfleet, director of the Connecticut Film Division.

What's the saying? Sometimes you have to spend money to make money.