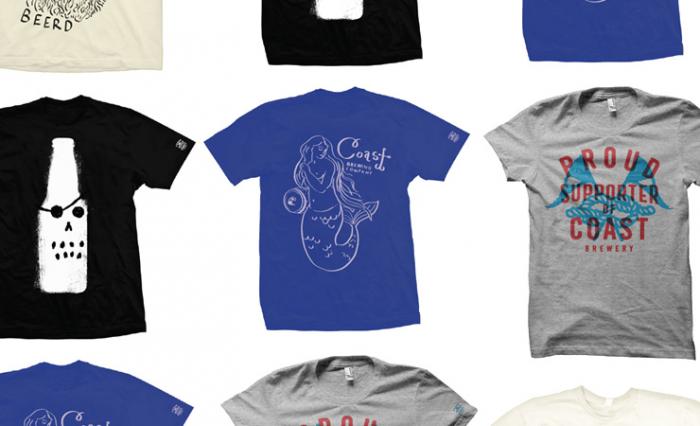 Fuzzco for Coast
6:57 am on Thursday March 7, 2013 | Posted by Ken Hawkins
Coast Brewing is looking for help to expand, and giving away goodies

If you're a fan of local beer makers Coast, you'll know one of their biggest problems is simply making enough beer to go around.

So it's little surprise they're looking to expand, and they're hoping to raise $40,000 in community investment to help them on their way — they're also aiming to give away some goodies to donors.

Give aways include those t-shirts up top, glasses, growlers, BBQ, signed photos, and lots more, much of which bears the design hand of Fuzzco.

They write, in part:

COAST is looking to expand the entire brewing system to a 30 bbl system. The majority of the funds we need are for the brewing equipment. The rest is a taproom and renovations, such as energy efficient lighting.

In a nutshell: You are supporting a small brewery and it's expansion.

When we first had the notion to open our own brewery in 2003, we said we would only do it if we could do it our way. We even had to change some laws to make it worth it (6% alcohol cap, no tastings or sales at brewery etc., see southcarolinabeer.org) Some of those tenets were (and still are) that the environment comes first! Followed closely by social and moral obligations. To all people involved, from manufacturers and consumers to our employees.

To be blunt, this means no Chinese equipment. For both human rights and quality issues, we made this choice early on. Really easy decision except when it comes to price. Non-Chinese sourced or manufactured equipment is easily double the amount (and when your talking doubling 100's of 1,000's of $$$'s, not gonna lie, it stings). However, we've made the decision and we're sticking to it. We want the brewery to be an extension of our life.

Check out the funding campaign and perhaps chip in over here.