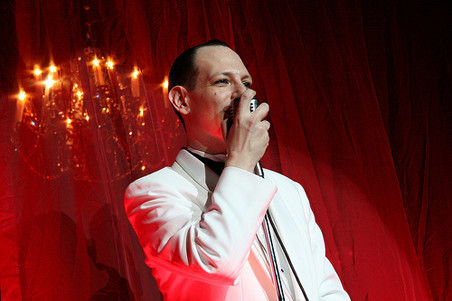 I really liked this show. I had no idea what to expect from 'Addicted to Bad Ideas: Peter Lorre's 20th Century.' I had actually never heard the name Peter Lorre before, although I surely recognized him immediately on the large screen above the stage. My interest in the show stemmed from a fondness of punk rock music bringing me back to my teenage days.

Get more coverage in our Spoleto special section. I wish that our seats had been higher so that we could have seen the screen easier but then we would have missed out on the teenagers singing along and dancing to the band. World/Inferno Friendship Society is just that, a band, a ska-punk band. They do a very good job at that.

Jack Terricloth, leader of the Brooklyn based ska-punk, cabaret style band is a pretty creepy looking dude. He looked nothing like Peter Lorre (rather like Fred Schneider from the B 52's) but has the persona down. He came across as vulnerable, lost, and misunderstood. According to Jack, doing a show influenced by Peter Lorre tells the tale of the 20th Century very well from a historical perspective. I think they were much more effective in relaying the emotions of the actor's life and time than a historical timeline. The lyrics contained a lot of information but as in any punk show you can't understand what they are saying through the noise (good noise!).

Information and facts though, come and go ... I can't remember any of the important dates of World War I or II but I can tell you how it felt to learn of all of the atrocities. What's more important, Fact or Feeling? I say feeling, and 'Addicted to Bad Ideas' got that right.