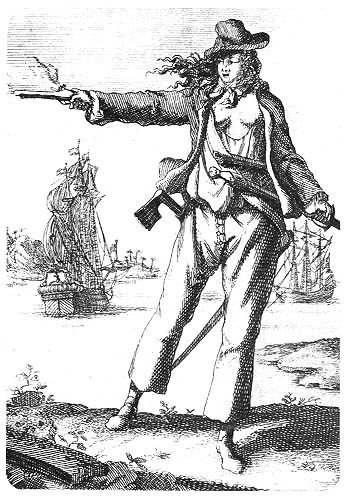 When Gordon’s daughters were young, any long trip in the car meant; “Dad tell me a pirate story.”

One daughter, Beth, would become a reporter, editor and public relations officer had high standards: Pirate stories must contain risk, danger, buried treasure and surprise endings to get the seal of approval. Another daughter, Lisa, who later became a banker, wanted to review the logic of the plot development when the story ended.

Beth liked ghosts but Lisa felt this confused the facts.

We found pirate books in great demand. One bookstore owner in Charleston indicated that if a used book on pirates arrived, it would be sold in a matter of hours. One trend in pirate literature, he told us, is interest in women pirates.

We found documentation of over 41 women pirates. We also found a few myths about piracy.

There were two kinds of sea marauders, legal privateers and pirates. Privateers had the authorization of a government and became heroes for looting and pillaging the government’s enemies. Pirates, without government sponsorship, would be hung for their sea crimes.

What about stories of treasure?  Pirates divided the treasure but usually fenced goods and spent all money after a few days in port. Pirate ships were crowded and disease filled but the allure of instant plunder and adventure attracted many including women during the golden age of piracy from 1650-1726.

Two famous women pirates were Anne Bonny and Mary Read whose pirate activities centered on the Atlantic Ocean and West Indies. Bonny and her husband, John “Calico Jack” Rackham noted for his colorful clothes, stole a ship to resume his pirate career after a previously gained a pardon. Bonny helped recruit Read and she and Mary were excellent fighters and on several ‘most wanted’ pirate lists. Preying mostly on merchant vessels, they successfully pilfered treasure on land and sea. Part of a pirate’s success was based on selecting ships for boarding that were not well defended. Anne Bonny and Mary Read fought as a team and were masters of pirate tactics.

Mary Read fell in love with the ships navigator, an artist, who had been forced aboard. When her love interest was challenged to a duel, Mary did not think he would win. Before the scheduled fight she slapped his challenger hard in the face and demanded an immediate duel. Read killed the pirate before her betrothed arrived.

Complaints from sea merchants were numerous and officials began to take note. Rackham, Bonny and company were too successful. Governor Nicholas Lawes issued the order to capture Rackham and his crew. Anne Bonny and Mary Read fought hard but their comrades were drunk and unable to fight. They were captured, tried and sentenced to hang. Mary begged unsuccessfully for the life of her betrothed lover, who she claimed was not a pirate. Bonny was still angry at Jack for not fighting and said, “If you’d fought like a man you needn’t hang like a dog.” Anne Bonny and Mary Read were pregnant and could not be hung under law, until the birth of their child. Mary died of heartbreak over her hanged lover before her child was born.

Anne Bonny’s father, a wealthy Charleston, South Carolina merchant with many contacts, made financial arrangements for Anne’s release. According to “The Oxford Dictionary of National Biography,” Anne Bonny returned to Charleston, had Rackham’s child and eventually married Joseph Burleigh and had more children. This is based on information given by her descendants.

Women’s opportunities in piracy were limited; there were pirate rules against women being aboard a pirate ship. After studying over 41 documented women pirates, who all seemed to be the equal of men, we could only conclude that where there is a Clyde there will always be a Bonny, even in piracy!

Gordon Mercer is past president and on the Board of Trustees of Pi Gamma Mu International Honor Society and professor emeritus at Western Carolina University. Marcia Gaines Mercer is a published author and columnist. We love Charleston and have a place in nearby Garden City as well as Franklin, North Carolina.

Tourneau, the nation's leading luxury cheap breitling watch retailer for over a century, announced today that it has opened its first dedicated shop-in-shop at Bloomingdale's Century City in Los Angeles. This newly renovated Bloomingdale's location will be the first to carry Tourneau's extensive selection of premium new and Certified Pre-Owned watches. This 1,200 square foot boutique will offer men's and women's fine watches from Cartier, replica omega, Breitling, Panerai, Longines and more. This partnership will offer Tourneau customers a new audience of fashion-forward consumers, while providing Bloomingdale's customers with unparalleled expertise and service in the watch industry.
"Tourneau's 116 years of expertise in the watch retail industry coupled with Bloomingdale's rich heritage as a chanel outlet luxury retailer make this a perfect partnership," says Ira Melnitsky, CEO of Tourneau. "We are excited to be bringing fine watches to such a premier location in Los Angeles."