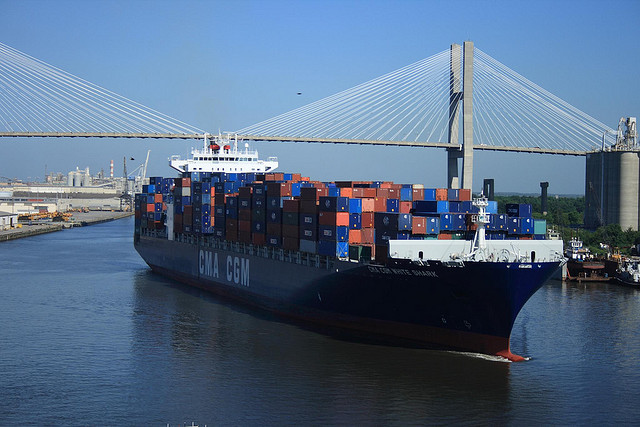 In its Thursday editorial (read it here) the newspaper declares S.C.'s stall tactics "myopic" and basically says the Palmetto State is shooting itself in the foot when it comes to any future possibility of there being a Jasper Ocean Terminal.

The editorial's headline of "Sour Grapes" really tells you all you need to know.

Notable is that the Georgia Department of Natural Resources is also feeling a time crunch but has reacted less severely and that's causing concerns that South Carolina is just playing politics.

Update January 4, beach concerns: The Corps is also planning to use dredged material to help combat erosion on Tybee Beach.

And that's a move that's also causing some concern; get briefed at The Savannah Morning News.

But it looks like this one is far less of a roadblock than DHEC's concerns described below.

First reporting, January 3: You've likely heard that plans are under way to dredge harbors around the world for the next generation of mega cargo ships.

Well the Savannah River is no exception and plans are underway to dredge — however the S.C. Department of Health and Environmental Control has balked at the proposal due to short public notice.

The department wrote in a public letter that, "the US Army Corps of Engineers has notified the Department that the Water Quality Certification for this project must be received by the end of the public comment period in late January 2011. This time period is not adequate to conduct the necessary review."

The Corps can appeal the decision, but a delay would likely not be welcome in the mad dash for deeper harbors — however the much stalled dredging for Charleston ports will likely welcome the delay, and there's also been talk of how a non-deepened Savannah River may be good for a Jasper port.

The full text of the Department's letter is below and a PDF can be read here.

Keep up on the port debate on our topic page.

The South Carolina Department of Health and Environmental Control (Department), acting on an application for Water Quality Certification pursuant to Section 401 of the Federal Clean Water Act, and Construction in Navigable Waters Permit pursuant to R. 19-450. et. Seq., 1976 SC Code of Laws has reached a proposed decision for the project described below:

The proposed project includes extensive environmental impacts that must be thoroughly reviewed by the Department. The public notice that was issued by the Corps on November 15, 2010, notes that the project violates water quality standards and the applicant proposes to mitigate for these impacts through a mechanical oxygenation system. The project could also potentially cause direct and indirect impacts to over 1,000 acres of wetlands. These impacts and the extensive mitigation proposal that is included in the draft EIS must also be reviewed by the Department. The Department must also determine if there are feasible alternatives that reduce the adverse consequences on water quality and classified uses. The time frame imposed by the Corps prevents the Department from reviewing comments from the public and the resource agencies prior to noticing a decision on the project. Coordination with the resource agencies is necessary for the Department to determine ifthe project has the potential to impact waters containing Federally recognized rare, threatened, or endangered species. Because the Savannah District did not allow adequate time to acquire and consider all of the information necessary to conduct a thorough review of the project, the Department has not been able to determine if the project is consistent with the certification requirements of Section 401 of the Clean Water Act, and does not have a reasonable assurance that the proposed project will be conducted in a manner consistent with the certification requirements of Section 401 of the Clean Water Act. Accordingly, the Department proposes to deny Water Quality Certification for the proposed project without prejudice.

A copy of the plans submitted by the applicant is available for review in the office of the Division of Water Quality, Bureau of Water.

Additional information about the technical aspects of this application is available from Chris Beckham, the project manager, at 803-898-4261.

The issuance of this Notice of Department Decision represents a final staff decision that may be appealed.