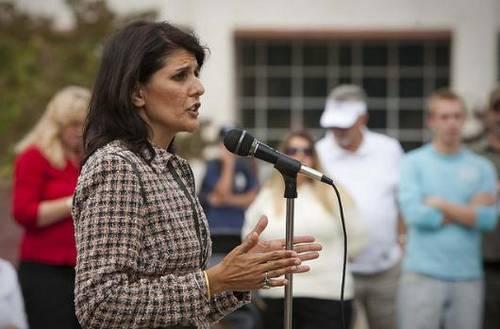 12:19 pm on Thursday January 20, 2011 | Posted by
Haley gets mixed response to her first State of the State, are the arts in jeopardy?

Gov. Nikki Haley gave her first State of the State speech last night, and so far reaction has been mixed.

While supporters, well, support her, others are saying that maybe Haley still was in campaign mode and offered too much rhetoric and too few details.

The Charleston Regional Business Journal also has a roundup of the speech, including those on both sides of the aisle calling on the governor to offer more details regarding what she plans to do next.

To her credit, Orangeburg Democrat Gilda Cobb-Hunter when interviewed by SCETV said she'd give Haley "the benefit of the doubt" due to it being her first State of the State.

Speaking of SCETV, Haley did shoot one across the bow of both the S.C. Arts Commission and ETV when she said:

And the reality is the role of South Carolina’s government in the year 2011 can no longer be to fund an Arts Commission that costs us $2.05 million.  It cannot be one that funds ETV, costing taxpayers $9.6 million.

Surely that won't play well in the more arts-infused areas, such as Beaufort.

You can check out the full text of Haley's speech here.