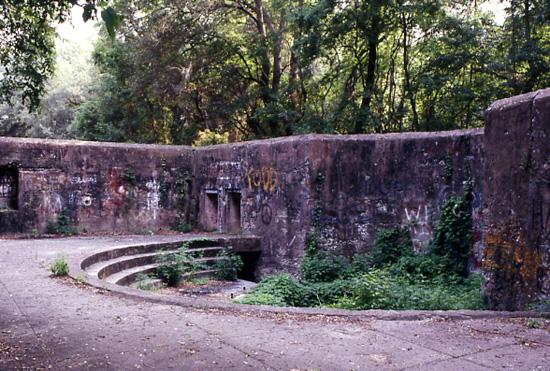 4:06 am on Saturday March 24, 2012 | Posted by Ken Hawkins
Learn more about Fort Fremont at this exhibit, and a lecture

South Carolina Department of Archives and History
The emplacement at Fort Fremont that once housed a gun capable of firing 10-inch shells.

The remains of Fort Fremont on St. Helena Island are quite easy to find — but it's not easy to make much sense of the barren concrete structures and a fort that long ago lost most of its buildings.

But a new exhibit at the Verdier House on Bay Street seeks to reignite interest and offer education on the site and its historical significance.

The "Fort Fremont: Homeland Security c. 1898﻿" exhibit is open now through June 30 and features many documents, maps, relics, and more on the fort that was built in the run-up to the Spanish American War.

The exhibit is being put on by the Friends of Fort Fremont.﻿

Fort Fremont 1st SC VolunteersRunning in tandem will be "The Spanish American War: More Than a Run Up a Hill", the topic of Historic Beaufort Foundation's Dinner and a Lecture on Monday, March 26, from 5:30 to 7 p.m., at the Verdier House at 801 Bay Street that will be followed by dinner at Saltus (call (843) 379-3331 ﻿for more information or to make reservations).

Dr. Mark Barnes, retired historian and senior archaeologist with the National Park Service will use period photography, illustrations, and images collected during research on an annotated bibliography of the 1898 War with Spain and the Philippine Insurrection, to discuss the conflict, its outcome, and some aspects from this war which are still with the United States of the present.

The largely-forgotten 100-day conflict touched Beaufort County with the construction and occupation of Fort Fremont on St. Helena Island and, according to Barnes, contributed to healing hard feelings remaining after the Civil War.

The fort was decommissioned in 1921, and the﻿ area was planned to be made into a park in 2004, but plans have not yet been fully executed.