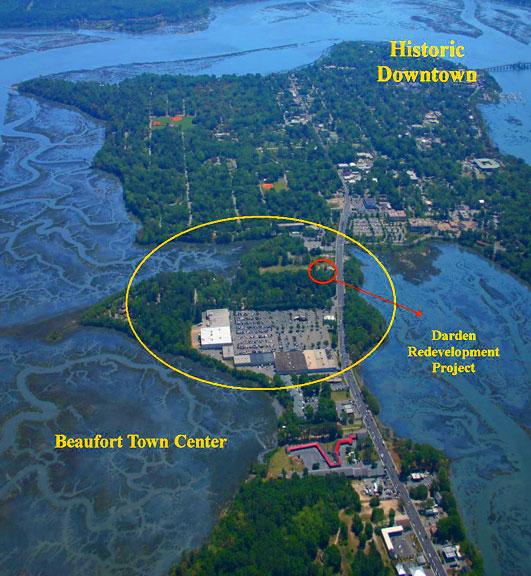 Provided
A document provided by the developer highlights the distance from the downtown district.

FIrst reporting, updates at the bottom: Remember that talk about an Olive Garden that was proposed on Boundary Street near the Outback Steakhouse?

Well the key word here is proposed, the plans still need review by the Beaufort-Port Royal Metropolitan Planning Commission, and that review is set to come on Monday, December 13, at 5:30 p.m.

But expect some tension as meeting support documents carry a recommendation from city planning staff to deny the $4.6 million Darden Restaurants project.

With a forecast of 100 jobs, $450,000 in tax and revenue fees, no one is going to want to let this one slip by, especially in this economy -- especially with another Olive Garden already going up in Bluffton.

Still faces are upbeat, from an earlier chat we had with 303 Associates Media Spokesman Glen McCaskey, "The Beaufort Town Center location will provide a locational dynamic that fits the area along with Moes, Outback, Ritas and the Restaurants in Town Center Shopping Plaza and will provide additional services for the growing County Government Center across the street", he says. "These restaurants will also add to the growing reputation of Beaufort as a community with highly desirable and diverse restaurant options."

The meeting is in city hall council chambers at 1911 Boundary Street.

Update December 11, friction points: Saving me from rehashing a lot (and a few phone calls,) The Island Packet has published a report on the friction.

It's a good walkthrough of the scenario, you can read it here.

What's looking to be the most contentious issue is whether or not the Boundary Street master plan calls for a future slip road in front of the Olive Garden development spot. The developer says it does, the city says it doesn't and that having a slip road there doesn't make sense.

A more current but more vague plan from 2009 doesn't seem to show a slip road. But a more detailed drawing in the 2006 master plan does show a slip road in the "future build out" phase.

It looks like there will be three major themes the developer will use to say they deserve the further setback adjustment: That the plan calls for a slip road, that Boundary Street is far busier than the master plan seeks and that the city won't be able to quiet the street, and that the plans continue to change.

We can see the clear difference in 2006 and 2009 Beaufort Town Center. In 2006 a lot of garden part of that town and after 3 years these garden remove from the town. Therefore it's time to rebuild the Town with a lot of garden which must be included there. However, I try to get custom dissertation writing service but this article have some very valid points to be notice here regarding garden.